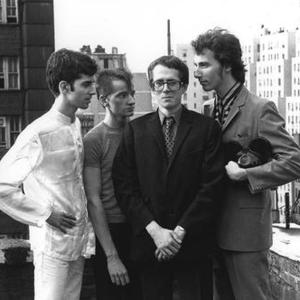 . Hardy), drummer John D. Haney, and bassist Charlie Harper. The band went through several bassists in the next few years, including Jeremy Harrington, and Andy Warren of the Ants, a childhood friend of Bid.

Experimental filmmaker Tony Potts began collaborating with the band in 1979, designing lighting and stage sets with film projections for their live appearances. The band's early persona was defined by the shadowy, uncertain stage images created by the films to such an extent he is often described as being the band's "fifth member."

They released several singles for the Rough Trade label before recording their debut album, "Strange Boutique", produced by Bob Sargeant, for Virgin Records' imprint DinDisc in 1980, as well as their follow-up effort, Love Zombies, produced by Alvin Clark and the band later that same year. John Haney left the band in 1981 and was replaced by Lexington Crane.

In 1985, with the same line-up as on Cast a Long Shadow, The Monochrome Set recorded the relatively mainstream album The Lost Weekend for major label Warner Bros. Records. The Lost Weekend failed commercially, and after a few singles, the band officially broke up, though they served as Jessica Griffin's backing band on the first album by the Would-Be-Goods, The Camera Loves Me.

In early 1990, Bid, Lester Square and Andy Warren reformed the band, with the addition of keyboardist Orson Presence and drummer Mike Slocombe (who was quickly replaced by Trevor Ready). The new band toured extensively--especially in Japan, where Bid had become a major star.

The band released several low-key albums for Cherry Red Records during the 1990s, and has been on hiatus since 1998, though Bid has since recorded a number of albums with his new band, Scarlet's Well.

The band reunited on 8 October 2008 for a one-off performance at Cherry Red's 30th Anniversary party at Dingwalls, London. It also marked the 30th year of The Monochrome Set. Bid, Andy Warren and Lester Square were joined by Jennifer Denitto (drums) and Sian Dada (keyboards) of Scarlet's Well, and performed 13 songs.
Band reformed in 2010.