The Men They Couldn't Hang 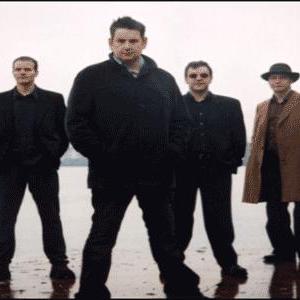 The Men They Couldn't Hang (TMTCH) are a British rock band whose mixture of folk and punk is not dissimilar to that of The Pogues (in fact founder member Shanne Bradley was a member of Shane MacGowan's first band the Nipple Erectors), although they have not enjoyed the same commercial or critical success as MacGowan's group. The original group consisted of Stefan Cush (Vocals, Guitar), Paul Simmonds (Guitar, Bouzouki, Mandolin, Keyboards), Phil "Swill" Odgers (Vocals, Guitar, Tin Whistle, Melodica), Jon Odgers (Drums, Percussion) and Shanne Bradley (Bass, Flute).

Their first single, "The Green Fields of France", was released in 1984. Written by Eric Bogle (of 'The Band Played Waltzing Matilda' fame), the song's protagonist imagined having a conversation with one of the fallen soldiers of World War I whilst sitting by his graveside. The song received considerable airplay on the John Peel show on BBC Radio 1 and finished at No.3 in Peel's Festive 50 for that year.

The following year came TMTCH's debut album, 'The Night of a Thousand Candles' and its accompanying single "Ironmasters" - this time a self-penned number by main songwriter Simmonds, linking the Industrial Revolution to the present-day treatment of the working class. The original final line of the song - "and oh, that iron bastard, she still gets her way" (a reference to the then Prime Minister Margaret Thatcher) had to be removed for the single version to ensure radio airplay.

In 1985 the band signed for MCA records and released "How Green Is The Valley". The record included "Ghosts Of Cable Street" a political number concerning The Battle of Cable Street in 1936 and "Shirt Of Blue" which regarded the miners' strike of 1984-5 . At the end of promotion for the album Shanne Bradley was replaced on bass by Ricky McGuire (ex UK Subs ).

In 1987 the band switched to Magnet Records and the new record released was, what may fans consider their best "Waiting For Bonaparte". Once again the strongest songs were stories of historical origin. "The Colours" told of an English mutineer sailor during the Napoleonic War and "The Crest" a stretcher bearer during World War II. Sadly whilst "The Colours" was at no.61 in the British top 75 it was blacklisted by Radio 1 due to the line "You've Come Here To Watch Me Hang", which echoed the events happening in South African townships at the time.

In 1988 the band were on the move again and signed for new label Silvertone (who later put out The Stone Roses debut release). Highlights of "Silvertown" included "Rain, Steam and Speed", "A Place In The Sun" and "A Map Of Morocco". They followed this up in 1990 with "The Domino Club" , which had a more conventional rock sound dispensing with much of the folk element in their sound.

Surprisingly the band split in 1991 after releasing a live set "Alive, Alive-0". Paul Simmonds and "Swill" Odgers then formed Liberty Cage who released an album "Sleep Of The Just" in 1994 and an EP "I'll Keep It With Mine" in 1995.

To the delight of their fans the band reformed (minus drummer Jon Odgers who had become Therapy? drum technician). Their new cd was "Never Born To Follow", released on the Demon label in 1996. The following year the band released the mini-album "Six Pack". Two "Best Of" collections followed "Majestic Grill" and "The Mud, The Blood And The Beer" both 1998.

The band again withdrew into semi retirement during which Odgers and Simmonds again relased new material together, "Baby Fishlips" in 1999 and "Folk At The Fortress" in 2002.

The band released a brand new cd in 2003 "The Cherry Red Jukebox", which most fans agreed was a real return to form. In 2005 the band released a DVD to celebrate 21 years together "21 Years Of Love And Hate". This was later released as a live double CD "Smugglers and Bounty Hunters". The band continue to play occasional live concerts. Their next planned release is an acoustic folk orientated cd, including reworking of several popular old songs from their back catalogue.

During breaks from the band "Swill" Odgers has released two Cd's with his band "The Swaggerband" which includes Ricky McGuire and Jon Odgers plus lyrical contribution from Paul Simmonds. They are "The Day After" in 2004 and "Elvis Lives Here" on Irregular Records in 2006.

Devil On The Wind