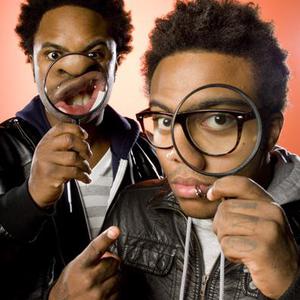 Composed of brothers Krispy Kream and Rah Al Millio, the Knux are an alternative rap duo who are musicians as well as singer/rappers. Born in New Orleans yet displaced by Hurricane Katrina, the musically schooled brothers began creating a stir nationally in late 2007 when they were the opening act for Common on his Finding Forever tour. Dressed in throwback Adidas zip-ups, fat gold chains, and altogether atypical contemporary rap attire, the Knux performed with a live band (the Symetrics) and DJ (DJ Cobra) and frequently left crowds puzzled and occasionally booing.

Once the Knux were signed to Interscope Records, however, attitudes changed as tastemakers began taking note -- first and foremost bloggers, who were quick to champion the duo and point out its affiliation with rap industry power broker Paul Rosenberg, the manager of Eminem. The brothers' MySpace page in turn began getting heavy traffic in lieu of any commercially available music. "Cappuccino" was the first Knux song officially released by Interscope, beginning with an appearance in an episode of the fourth season of the HBO show Entourage; a video for the song was subsequently filmed. Their debut album, Remind Me in 3 Days, was released in Oct. of 08.

Remind Me In 3 Days