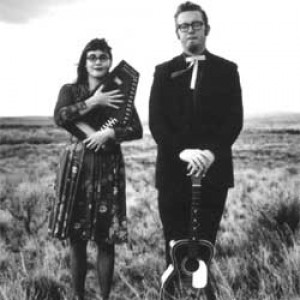 The Handsome Family are an alternative-country duo from the United States, the couple Brett and Rennie Sparks who live in Albuquerque, New Mexico. Brett writes the music while Rennie, who also is an author, writes the lyrics. Typical for the lyrics is a close connection to the literary genre American Gothic, and Gothic elements found in early country and folk songs. Their seventh CD, Last Days Of Wonder (June.

Their seventh CD, Last Days Of Wonder (June. 2006) was one of Mojo's top ten American Albums for 2006 and called ?an unqualified triumph? by Uncut. Of their sixth CD, Singing Bones, The UK's Independent wrote, ?Rarely, even in the fatalistic world of country music, has the precarious mystery of mortality been captured with such poetic grace as on Singing Bones.?

They have appeared in the movie, I'm Your Man (2005), a tribute to Leonard Cohen as well as Searching for the Wrong-Eyed Jesus (2004). In 2004, a reader's poll in Mojo named The Handsome Family's third CD, Through the Trees one of the ten essential Americana records.

Last Days of Wonder is a collection of love songs sung in airports, garbage dumps, drive-thru windows and shark-infested waters. The CD celebrates the little miraculous moments of beauty found in everyday life: a golf course shining in the rain, hanging lights bouncing in the breeze, pigeons singing from billboards, trees blooming in squares of dirt. The songs linger on those moments when we're pulled from the ordinary to feel awed by mystery, bewildered by beauty, terrified by the vast unknowable around us (whether we wander through shady groves or crowded parking lots).

Brett Sparks, who writes the music, draws from medieval melody, country-politan string arrangements, tin-pan alley crooners, and dusty hillbilly records to weave together the fabric of this record. Rennie Sparks, who writes the lyrics, makes magical realism from polar adventure stories, pagan hunting songs and her own time spent (like most people) riding up elevators, staring out hotel room windows, and driving interstate highways. The entire album was recorded over a year's time in the converted garage studio at the back of the Sparks' Albuquerque house. Brett recorded it all on a Mac and a whole mess of wires, microphones and little metal boxes. Alongside the usual guitar, bass and drums you will hear mellotrons, ukulele, banjo, bowed wine glasses, and trombone.

In The Forest Of Missing Planes (EP)