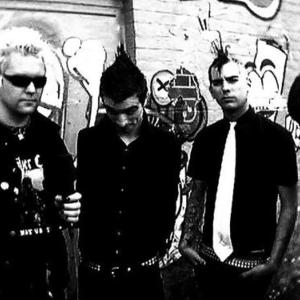 Anti-Flag is a punk rock band based in the United States, formed in 1988 in Pittsburgh, Pennsylvania, and known for its outspoken left-wing political views, focusing on anti-war activism, imperialism, class struggle, human rights, and other sociopolitical sentiments. Members include singer/guitarist Justin Sane, singer/bassist Chris Barker, guitarist Chris Head, and drummer Pat Thetic; Chris Barker ("Chris #2") replaced original bassist Andy Flag in 1999. The band is known also for their advocacy of progressive political action groups such as Greenpeace and Amnesty International.

Most recently, the band has focused criticism on the United States bailouts, which were executed to give massive portions of capital directly towards salvaging the national banks.

Their first appearance was on Rock'n With Father Mike a 7 inch Split EP released by Anti-Flag and The Bad Genes. It contains some of the oldest Anti-Flag recordings, as it was released in 1993 when they had newly formed the band. Possibly the rarest Anti-Flag record, it is highly sought after by fans today. The title is a reference to a punk rock preacher who was known as Father Mike. There are three known versions of the record. One has a pink cover, one has a light blue cover, and one has a yellow cover. Then Reject another 7 inch Split EP Anti-Flag with a ska punk band Against All Authority, released in 1996. Though the original EP is hard to find in music stores, due to its DIY release, it can be found spread about the internet on music-sharing sites. Their first studio album on New Red Archives , Die for the Government, was released in 1996. Andy Flag leaves the band after Their System Doesn't Work For You album, because of personal disputes with Justin Sane over the band's direction. Their System Doesn't Work For You was recorded in 1998 on their label A-F Records. A drastically less produced album than Die For the Government. Chris Head began filling in on bass in 1998 and then moved to guitar after Jamie Cock took over bass in 1999. The current lineup finalized in 1999 when Chris #2 replaced Jamie on bass. During this time they released albums on Go Kart Records and Fat Wreck Chords, as well as their own label, A-F Records. Of these, Underground Network (recorded by legendary punk producer Mass Giorgini), is widely considered as their "breakthrough" album, successfully connecting the band with its largest audience to that point.

On October 8, 2004, U.S. Representative Jim McDermott gave a speech in the House of Representatives, praising Anti-Flag for working to encourage young people to register and vote.

In 2005 Anti-Flag signed a two-album record contract with major label RCA, though their label A-F Records remains independent. Their first major-label album, For Blood And Empire, was released on March 21, 2006.

On November 25th, 2007 Anti-Flag revealed on their official site that their new album will be titled The Bright Lights of America. It was produced by Tony Visconti and was released on April 1, 2008.

Their latest album recently came out in August of 2009, called The People or the Gun.

A Document Of Dissent