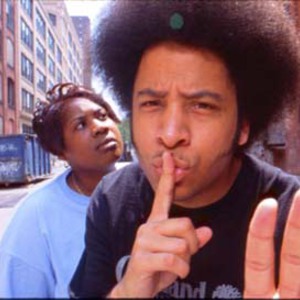 The Coup is a political hip hop group based in Oakland, California. It formed as a three-member group in 1992 with rappers (Raymond) Boots Riley and E-Roc along with DJ Pam the Funkstress. E-Roc left on amicable terms after the group's second album, but appears on the track "Breathing Apparatus" on The Coup's third album, Steal This Album. The group is now a duo. The Coup, part of the sub-genre of political hip hop, is politically radical and Marxist in their music, and align themselves with other radical hip-hop groups like dead prez.

The Coup, part of the sub-genre of political hip hop, is politically radical and Marxist in their music, and align themselves with other radical hip-hop groups like dead prez. Their music is characterized by electronic sounds and bass-driven backbeats overlaid by humorous, cynical and sometimes violent lyrics criticizing capitalism, American politics, pimping as a form of patriarchal exploitation, and police brutality, among other things.

The Coup's debut album was 1993's Kill My Landlord. In 1994 they released their second album, Genocide and Juice. After a four-year recording hiatus, the group released the critically acclaimed Steal This Album in 1998, the title of which was reminiscent of lifestylist Abbie Hoffman's Steal this Book. The album featured the stand-out single "Me and Jesus the Pimp in a '79 Granada Last Night". The online magazine Dusted called Steal This Album "the best hip-hop album of the 1990s".

In 2001, The Coup released Party Music to widespread praise. However, in part due to distribution problems, sales of the album were low. The original album cover art depicted group members Pam the Funkstress and Riley standing in front of the twin towers of the World Trade Center as they are destroyed by huge explosions; Riley is pushing the button on a guitar tuner. The cover art was finished in June 2001, and was scheduled to be released just after the September 11, 2001 attacks. In response to the uncanny similarity of the artwork with the Sept. 11 attacks, the album release was held back until alternative cover art could be prepared.

The attention generated to the album's cover art generated some criticism of the group's lyrical content as well, particularly the Party Music track "5 Million Ways to Kill a CEO". The song's rap includes lines like, "You could throw a twenty in a vat of hot oil/When he jump in after it, watch him boil". Conservative columnist Michelle Malkin cited the song in calling The Coup's work a "stomach-turning example of anti-Americanism disguised as highbrow intellectual expression".

On November 15, 2005, Tarus Jackson (AKA Terrance), who had joined the group as a promoter, was fatally shot during a robbery at his home in Oakland.

December 2, 2006 saw another tragedy for The Coup: About two hours following a performance at the San Diego House of Blues, the tour bus in which they were riding drove off the road and flipped over before becoming engulfed in flames. All passengers managed to climb out alive, though some were badly injured. They did, however, lose all of their clothes, computers, cash, identification, house/car keys and cell phones as well as all of their instruments and sound equipment. Since an insurance settlement is potentially a year away, they were forced to cancel the rest of their tour.

Their songs "My Favorite Mutiny" and "Pork & Beef" were featured in the 2007 film Superbad, while "Ridin' The Fence" was featured in EA's 2007 skateboarding video game, Skate.

Sorry To Bother You