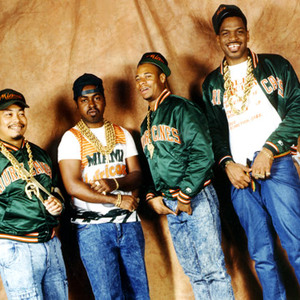 Early career 2 Live Crew was created by David "Treach DJ Mr. Mixx" Hobbs in Riverside, California, with fellow rappers Chris (Fresh Kid Ice) Wongwon, and Yuri ("Amazing Vee") Vielot. The 3 met at March AFB Riverside, CA, as they were enlisted in the Air Force. Along with giving local parties on and off base, they recorded their first singles through Macola Records Distribution in Los Angeles, CA.

2 Live Crew was created by David "Treach DJ Mr. Mixx" Hobbs in Riverside, California, with fellow rappers Chris (Fresh Kid Ice) Wongwon, and Yuri ("Amazing Vee") Vielot. The 3 met at March AFB Riverside, CA, as they were enlisted in the Air Force.[citation needed] Along with giving local parties on and off base, they recorded their first singles through Macola Records Distribution in Los Angeles, CA. They released "Revelation" in 1984; the single sold well in Florida, encouraging the group to release "What I Like." In 1986, due to the popularity of the new single "Throw the Dick," the group, including new member Mark "Brother Marquis" Ross replacing Amazing Vee due to military commitments, relocated to Miami and teamed up with Ghetto Style DJ's and soon to be manager and eventual performer Luther Campbell, who used the nickname "Luke Skyywalker" (and was subsequently sued by George Lucas).

The year 1987 saw the release of The 2 Live Crew Is What We Are, featuring profane and sexually graphic lyrics. Rudy Ray Moore's comedy albums and other XXX assorted comedy albums provided the material for most of the explicit samples that "Mr. Mixx" used. The album was produced by Mr. Mixx. Bob Rosenberg, a south Florida DJ who would later form the dance-pop group Will to Power, remixed and edited the song "Beat Box".[2] The record went gold. Though the controversy did not rise to the levels the group would reach in the future, a Florida store clerk was charged and acquitted of felony charges for selling the album to a fourteen-year-old girl in 1987.

Campbell decided to sell a separate clean version in addition to the explicit version of the next album, Move Somethin' (1988), produced by Mr. Mixx. A record store clerk in Alexander City, Alabama was cited for selling a copy to an undercover police officer in 1988. It was the first time in the United States that a record store owner was held liable for obscenity over music. The charges were dropped after a jury found the record store not guilty.

The American Family Association did not think the presence of a "Parental Advisory" sticker was enough to adequately warn listeners of what was inside the case. Jack Thompson, a lawyer affiliated with the AFA, met with Florida Governor Bob Martinez and convinced him to look into the album to see if it met the legal classification of obscene. In 1990 action was taken at the local level and Nick Navarro, Broward County sheriff received a ruling from judge Mel Grossman that probable cause for obscenity violations existed

Navarro warned record store owners that selling the album may be prosecutable. 2 Live Crew then filed a suit against Navarro. That June, judge Jose Gonzalez ruled against the album, declaring it obscene and illegal to sell. Charles Freeman, a local retailer, was arrested two days later, after selling a copy to an undercover police officer. This was followed by the arrest of three members of 2 Live Crew after they performed some material from the album at a live performance held at the Futura Night Club in Hollywood Florida. They were acquitted soon after. In 1992, the United States Court of Appeals for the Eleventh Circuit overturned the obscenity ruling from Jose Gonzales, and the Supreme Court of the United States refused to hear Broward County's appeal. A notable feature of the case was the distinguished literary critic and now Harvard University professor, Henry Louis Gates, Jr. as an expert witness on behalf of the defendants. He argued that the material that the county alleged was profane, actually had important roots in African-American vernacular, games, and literary traditions and should be protected.

As a result of the controversy, As Nasty As They Wanna Be sold over two million copies. It peaked at #29 on The Billboard 200 and #3 on the Top R&B/Hip-Hop Albums chart. A few other retailers were later arrested for selling it as well. Later hard rock band Van Halen sued over an uncleared sample of their song "Ain't Talkin' 'Bout Love" in the 2 Live Crew Song "The Fuck Shop". The publicity then continued when George Lucas, owner of the Star Wars universe, successfully sued Campbell for appropriating the name "Skywalker" for his record label, Luke Skywalker Records. Campbell changed his stage name to Luke (and changed the record label's name to Luke Records) and then released an extremely political solo album, Banned in the USA after obtaining permission to use an interpolation of Bruce Springsteen's Born in the U.S.A. 2 Live Crew paraphernalia with the Luke Skywalker or Skywalker logos are usually sought after as collector's items.

In 1991, 2 Live Crew released the very first live rap album, Live in Concert, and Sports Weekend, a full-length studio original. It peaked at #22 on The Billboard 200 and #19 on the Top R&B/Hip-Hop Albums chart. It did not gain the same sales level that they experienced with As Nasty As They Wanna Be. The 2 Live Crew members went their separate ways after this. Luke pursued his solo music career and other projects.

In 1992, Fresh Kid Ice released unreleased tracks from pre-Luke 2 Live Crew, Deal with This under the name Rock on Crew, while Luke and Ice also released new solo albums, I Got Shit on My Mind and The Chinaman, respectively.[citation needed]

Mark "Brother Marquis" Ross co-starred alongside Fred Williamson in the film South Beach and started a new group with Aldrin "DJ Toomp" Davis, a former member of Poison Clan, which was also signed to Campbell's label. They named the group 2 Nazty, and released the album "Indecent Exposure" on Attitude Records in 1993. The single was called "Can't Say I Love You," but it did not chart, and the group never released a second album. The single was a departure from the typical 2 Live nasty rhymes, and focuses on what a deep emotion love is, and how it should not be said to anyone lightly. The rest of the album sounds like a 2 Live Crew record, and focuses on sexual exploits of the members.

The hard feelings over the split of the 2 Live Crew is apparent on the album, as Marquis is heard on the track "Interview" saying he was fired from the group, and that the other members had no love for him. DJ Toomp also has a line in "Be My Bitch" comparing signing a deal with Skyywalker Records to signing your life away.[citation needed]

During this time the lawsuit brought about by the estate of Roy Orbison, the copyright owners of "Oh, Pretty Woman," went to the Supreme Court. The Crew had parodied the original on the album As Clean As They Wanna Be without permission. The Supreme Court adopted a rule from an earlier Ninth Circuit case Fisher v. Dees. 794 F.2d 432 (9th Cir. 1986) involving Rick Dees, and ruled that 2 Live Crew's parody was fair use.[4]

Luke, Fresh Kid Ice, Brother Marquis and Mr. Mixx re-formed again to record "Hoochie Mama" for the soundtrack to the movie Friday. Plans to reunite for an album were short-lived, as Fresh Kid Ice, Mr. Mixx, and Brother Marquis left Luke and Luke Records to go to Lil' Joe Records and released Shake a Lil' Somethin' (1996). It peaked at #145 on the Billboard 200, also peaking at #33 on the Top R&B/Hip-Hop Albums chart.

Mr. Mixx left soon after, leaving Fresh Kid Ice and Brother Marquis to record The Real One in 1998. It peaked at #59 on the Top R&B/Hip-Hop Albums chart. In 1998, Brother Marquis became a born-again Christian, quit the group, and began devoting himself to combating what he sees as the "evils" that he as a member of 2 Live Crew portrayed and glorified. Rapper "First Degree aka Tiki was then recruited as the groups newest addition by Fresh Kid Ice however, his attempt was only for a duration of a few years. Brother Marquis's born again status/views on music changed back to his roots in 2006 when he worked with music producers Dylan Berry and Noah Lifschey of Hollowstone Music under in the LA rock/rap group called the Shake Joint and released a solo album in 2008 that contained explicit lyrics.

2 Live Crew performed at the 2005 Gathering of the Juggalos.

In late 2007, 2 Live Crew announced on their MySpace page that Brother Marquis and Fresh Kid Ice will be releasing an album sometime in 2008. The album, tentatively named Just Wanna Be Heard, is currently scheduled for release in the spring of 2009.

Sports Weekend (As Clean As They Wanna Be Part 2)

Fresh Kid Ice Is Back

Goes To The Movies: A Decade Of Hits