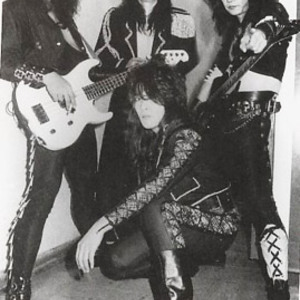 There are 7 Artists named Anthem #1. Anthem is a legendary Japanese heavy metal band founded in Tokyo during 1981 as a quartet of singer Toshihito Maeda, guitarist Akifumi Koyanagi, bass player ???? (Naoto Shibata) ("Ski") and drummer Takamasa Ohuchi. Koyanagi left in late 1983 to be replaced by Hiroya Fukada. In December 1984 vocalist Toshihito Maeda also left and Anthem drafted ???? (Eizo Sakamoto) for their debut eponymous album issued in July 1985 by Nexus and licensed to Europe via Roadrunner Records.

#1. Anthem is a legendary Japanese heavy metal band founded in Tokyo during 1981 as a quartet of singer Toshihito Maeda, guitarist Akifumi Koyanagi, bass player ???? (Naoto Shibata) ("Ski") and drummer Takamasa Ohuchi. Koyanagi left in late 1983 to be replaced by Hiroya Fukada. In December 1984 vocalist Toshihito Maeda also left and Anthem drafted ???? (Eizo Sakamoto) for their debut eponymous album issued in July 1985 by Nexus and licensed to Europe via Roadrunner Records. Their first release was the self-titled "Anthem" album, featuring classics songs like 'Wild Anthem' and 'Warning Action'. The next release, "Tightrope" showcased a more catchy, melodic sound with an improved vocal perfomance by Eizo. "Bound to Break" was to be the last album featuring Eizo Sakamoto for nearly two decades, and was by far his most impressive vocal performance to that point. The album was full of classics (Empty Eyes, Bound to Break, Soldiers) and introduced the band's long-time world-famous Producer, Chris Tsangarides (Perhaps best known for producing Judas Priest's classic 1990 album, 'Painkiller'). With the departure of Eizo in 1988, Naoto recruited Yukio Morikawa to the band's vocal position.

With Yukio came the album Gypsy Ways, considered the band's most enduringly popular album. the voice of Yukio made the band a great success at that time, and he was similar in style, vocal range and ability to Graham Bonnet. In 89, the album "Hunting Time" was released, in which the song "The Juggler" was used as a PV. In the beginning of 90's Anthem dealt with another departure, this time Hiroya Fukuda (guitar) left and was replaced by Hideaki 'Shadow Walker' Nakama which recorded the album "No Smoke Without Fire", this time without the band's staple Producer / Engineer Tsangarides. Hideaki left the band after recording just the one album and the search for a new guitarist began. After many auditions the young Akio Shimizu joined the band. In 1992, the band release "Domestic Booty", one of their best albums, with amazing and technical songs (courtesy of Akio): Venom Strike, Renegade, and The Dice of No Mercy. Unfortunately, classic-style Heavy Metal was out of fashion in the early 90's, and with the explosion of Grunge in the U.S. and the Visual Kei movement in Japanese music, Naoto decided to put an end to the band. The members of Anthem followed the album's release with a very big tour covering many cities of Japan and finally they released the VHS/CD "Last Anthem - Live" recorded at Nissin Power Station, which was to be the band's last show for nearly eight years.

After the long hiatus, Anthem returned in 2000, with the album "Heavy Metal Anthem" which featured the vocalist Graham Bonnet (from Rainbow), the album is entirely composed by classic band songs rearranged to English. The lineup on HMA was: Graham Bonnet (vocals), Naoto Shibata (bass), Akio Shimizu (guitar) and Takamasa Oouchi (drums).

Later, Hirotsugu Homma (who played together briefly with Shibata in Loudness) replaced Takamasa on the drums and Eizo returned to the vocals. In 2001 they released Seven Hills, showcasing an entirely new musical direction for the band, although still firmly rooted in 80's Heavy Metal. In 2002 came "Overload", which is considered by most critics to be much more agressive than Seven Hills. In 2003 the band recorded "Live Melt Down" in Citta Club Kawazaki, with a setlist full of classics and an amazing perfomance by Eizo. 2004 the band release the single "Onslaught" followed by the album "Eternal Warrior" following the sound direction of Overload. In 2005, Anthem celebrates the 20th Year Anniversary with a amazing tour where all the member of the band since 1985 played the band songs in their respective formations. At the final show of this tour was filmed the DVD "20th Anniversary Tour" (again at Club Citta in Kawazaki).

In 2006 Anthem released "Immortal", followed by the single and PV of "Immortal Bind". The most recent output has seen Anthem push even further into the Power Metal-tinged style showcased on 'Domestic Booty' and 'Eternal Warrior' with 2008's "Black Empire". A PV of 'Heat of the Night' was released shortly after the album hit in November, '08 and has thus far garnered even more positive critical reviews than "Immortal".

#3. Female Fronted Classic Rock band who's debut album Cuttin' Thru' was released in 1981. It suffered from poor production but was later re-recorded/remastered in 1999 and released as Cuttin' Thru' II.

#4.Hardcore band from New Haven, CT, USA. Anthem was previously called Breaking Point back in 2000 when they started writing songs and played their first show in June of 2001 with CTHC bands Forthright, Dead Wrong, and Your Mistake. They self released two demos: Demo 2001 and Demo 2002 (Bitter Hearts and Blackened Starts). Changed their name to Anthem in late 2001 to avoid confusion with a certain nu-metal band. Anthem broke up in May 2002, citing differences between band members as the reason. Dan Sullivan, the guitarist, now plays guitar in Living Hell. Mike Hall, the second drummer, went on to drum for Verse for a few years.

#7 NYC based rapper who recently released his first single, "Yellow Cab" from his upcoming album, Almost There. He is signed to upstart indie hip-hop label Amoeba Music group. "Yellow Cab" is an ode to New York nightlife and has been a buzzing on the club scene. Almost There is being released in August.
www.amgesquires.com