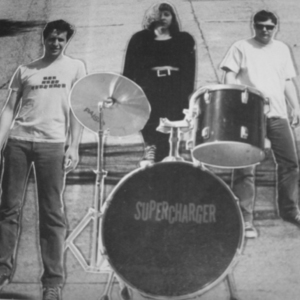 There are five bands with this name: 1. An American Lo-Fi garage punk band. Formed in San Francisco in 1991 by Greg Lowery (bass/vocals), Darin Raeffelli (guitar/vocals) and Karen Singletary (drums/vocals). That same year they self-released their self-titled debut album. The first limited pressing is now a collectors item but it was reissued on Estrus Records in 1997. Estrus also released the bands sophomore album "Goes Way Out" in 1993.

This would also be Supercharger's last album as they broke up later that year after a European tour with The Mummies (who covered their song 'Sooprize Package For Mr Mineo').

After Supercharger broke up Greg Lowery founded iconic garage punk label Rip Off Records and played in several bands in a similar vein as Supercharger, e.g. The Rip Offs and the Zodiac Killers.

2. A Belgian Rock Band: Tim Roelandt - Vocals & Guitar, Pieter Sablon - Bass, Felix Serwir - Drums
3. One of the countless dance-projects from Ramon Zenker.
4. A Danish band that so far has released an EP by the name "Junkyard Spectacles". The band plays no-nonsense rock 'n' roll, and their EP is produced by ex-HateSphere singer, Jacob Bredahl.
5. A full-on, head-banging rock 'n' roll Geordie quartet from Newcastle upon Tyne in the UK, with one EP titled "Smashing Up the Future".

That's How We Roll

Live At The Covered Wagon (S.F)