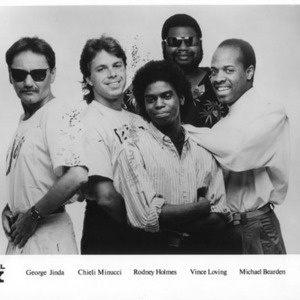 Source: Chielimusic.com It's time to Party with the masters of the contemporary jazz scene, the Grammy nominated, chart-topping sensation Special EFX. Few bands in contemporary jazz have been as consistently engaging, entertaining and artistically satisfying as this seminal group. Special EFX, spearheaded by guitarist Chieli Minucci (pronounced Kee-eli Mee-noo-che), who along with George Jinda has helped to pave the road of contemporary jazz through the 80s and 90s and continues to set the trend.

It's time to Party with the masters of the contemporary jazz scene, the Grammy nominated, chart-topping sensation Special EFX. Few bands in contemporary jazz have been as consistently engaging, entertaining and artistically satisfying as this seminal group. Special EFX, spearheaded by guitarist Chieli Minucci (pronounced Kee-eli Mee-noo-che), who along with George Jinda has helped to pave the road of contemporary jazz through the 80s and 90s and continues to set the trend. Once again Special EFX proves why they are among the best with their latest and 17th CD, Party. In typical fashion, the band produces a fresh mix of irresistible grooves filled with funky memorable hooks, lyrical head bopping melodies and house inspired body shaking rhythms. Party follows on the heels of the acclaimed album Butterfly, whose single "Cruise Control" held the number one spot on R&R's smooth jazz charts for five weeks!


Chieli Minucci explains the secret to the band's longevity, "Special EFX has been my vision of what contemporary instrumental music should be. One of the reasons we have been able to maintain our popularity is because we have evolved and changed over the years. When the band first started we had a heavy world music influence. Later we highlighted more of a progressive rock sound, followed by acid jazz and now we have more of a rhythm and blues influence. When people hear our music, they can expect to hear a little of everything."

As a multi-talented guitarist-composer-arranger-producer, Chieli Minucci has left his stamp on a broad range of musical offerings from movie soundtracks and television soap operas to high-profile session work with such illustrious pop artists as Celine Dion, Marc Anthony, Jennifer Lopez, Jewel, the Backstreet Boys and Enrique Iglesias, to name a few. Along the way toward establishing himself as a smooth jazz icon, Chieli has earned several Emmy Award nominations for his music on the long running NBC daytime drama "The Guiding Light" (winning one in 1998). Chieli's latest solo effort Night Grooves has been making waves at radio. The album's single "Kickin' It Hard" has managed the impressive feat of staying on the charts for over 30 weeks! Jazziz Magazine says, "Chieli Minucci is both an influential elder statesman and true innovator."

Born in Huntington, Long Island, Minucci grew up in nearby Forest Hills, Queens, where he still resides. His father, Ulpio Minucci, was an Italian-born composer who wrote songs for Nat King Cole, Bing Crosby and Julius La Rosa. The elder Minucci introduced his son to the piano at age six and encouraged the boy to become a composer. Chieli fell in love with guitar at age eight and has been on the six-string path ever since.

"Party is a real celebration record. The whole idea was to create a vibe that permeates the entire album from start to finish. It's like music for your own private party," shares Chieli Minucci who composed all 10-tracks on the CD. Highlights include the thumping '80s inspired opener "Get On Up" and the Flamenco Latin-tinged number "Mi Amore." These two tracks are the only songs on the album that prominently feature Chieli's guitar. He explains "One of the things that makes this CD so different is that it is heavily saxophone driven." Saxophonist David Mann shines throughout the CD with his muscular yet sensual sax playing. Mann has been the saxophonist of choice for the likes of Michael Jackson, Tower of Power, James Taylor and Paul Simon among others. As a producer, he has lent his skills to such notables as Kim Waters, Rachael Z and Wayman Tisdale, to name a few. Chieli Minucci says of his longtime friend Mann, " David has been the sax player I have worked with the most and he is simply the best on the scene. He is amazingly musical and the sound he produces on his instrument is incredible."

Standout tracks on Party include the drum and bass/house tinged "Ready For Anything," the album's first single, "Ladies Man," which is sure to be a crowd pleaser and the hip-hop flavored ballad "Fantasies," featuring Mann on flute. Also included is a homage to master bassist Jaco Pastorious called "Dusk Till Dawn" that features bassist Jerry Books. Chieli Minucci says "Jerry has been with the band for over 10 years, and he is also a good friend. He is incredibly varied in his ability on bass. He is first-rate and he's the first guy I call."

The origin of Special EFX dates back a little over two decades when a pair of musicians (Chieli Minucci and the late George Jinda) met during a series of jam sessions in a New York loft. By winter of that year, a band had begun to take shape. The smooth, romantic guitar sound of Chieli Minucci had found its perfect complement in the wide-ranging global percussion of George Jinda (a native of Budapest, Hungary). Special EFX had 13 albums under its belt when creative differences saw the amicable parting of Chieli and George in the mid-90s. Chieli launched a successful solo career and George recorded a 14th Special EFX album, 1996's Here To Stay. Then Jinda suffered a devastating asthma/diabetic attack that left him with a neurological condition called myoclonic disorder. With the blessing of George and his wife, Chieli returned to the Special EFX fold keeping the vision alive. Jinda passed away in 2002.

In 1999, the band released Masterpiece, its Shanachie debut and Special EFX was back on the road to a welcoming audience of old fans and new enthusiasts. "It was a mixed bag for me," says Chieli about stepping back on the road with Special EFX. "On the one hand, I was delighted to get out and play the Special EFX repertoire, and take some of the guys who'd been with us for years. We do material from the band's first record right up to the new one, a spectrum of how the group's sound evolved over the years. But it felt a little weird at first to do it without George." Special EFX's Butterfly produced the hit single "Cruise Control" and is the best testing record of all time in smooth jazz radio's history!

Now with the release of Party, Special EFX is poised to brings its genius into yet another decade, making new fans along the way and strengthening ties with old ones.

The History of
Special EFX Shows:

Here you'll see listed, the entire live concert history of Special EFX, from the dates, to the places, with all the amazing musicians listed who performed with us. There was a brief tour, during 1996, in which I didn't participate, since I was on tour supporting my first solo release, ?Jewels'. After that year, George fell ill, and didn't tour with the band any longer. Sadly, he succumbed to his long illness, and since then the Special EFX band and Chieli Minucci band have come together as one. The last George Jinda date was 10/28/98

Deep As the Night