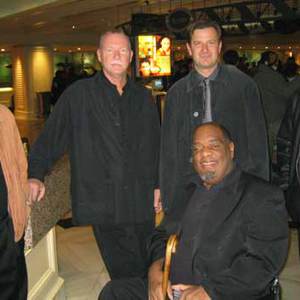 Fattburger is a smooth jazz band from San Diego. Their first CD was 'One of a Kind' in 1986. They released the album 'Work to Do' in 2004. Their website is: fattburger.com One of the most popular pop/jazz groups, Fattburger has been classified by some as new adult contemporary music, contemporary jazz, or smooth jazz. The San Diego-based unit has survived through many trends and still plays the same type of accessible funky music that was its original goal. Saxophonist Hollis Gentry, while in high school, led a group (Power) that opened for Cannonball Adderley at a college concert in 1972.

After graduating, Gentry toured with R&B groups. He attended San Diego State University and during the second half of the 1970s had opportunities to play straight-ahead jazz with Bruce Cameron. When their last band broke up, Gentry and the other musicians (keyboardist Carl Evans, bassist Mark Hunter, drummer Kevin Koch, and guitarist Steve Laury) went out on their own and became Fattburger. Tommy Aros joined the band as their percussionist and in the early '90s, when Laury started a solo career, Evan Marks became Fattburger's guitarist. In the mid 90's, Fattburger found a home on the Shanachie label, releasing a string of well-received albums into the 21st Century

Come And Get It