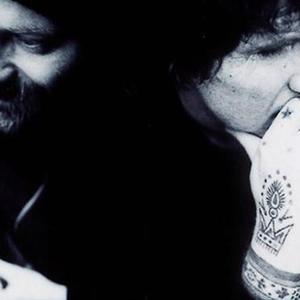 Soulsavers (also known as The Soulsavers Soundsystem) are an English production and remix team comprised of Rich Machin and Ian Glover. The Soulsavers' downtempo electronica sound incorporates influences of rock, gospel, soul, and country. To date, the duo has released three albums: Tough Guys Don't Dance in 2003, It's Not How Far You Fall, It's the Way You Land (with Mark Lanegan and others) in 2007, and Broken in 2009.

Their debut album Tough Guys Don't Dance had Spain lead singer Josh Haden singing vocals on the songs "Love," "Down So Low" and "Precious Time." Haden's own song "Spiritual" would later be covered by Mark Lanegan and Soulsavers on the duo's next album It's Not How Far You Fall, It's the Way You Land. This album also features guests Jimi Goodwin of Doves, Will Oldham (a.k.a. Bonnie "Prince" Billy), P.W. Long and Richard Warren. The album spawned two singles: "Revival" and "Kingdoms of Rain." "Kingdoms of Rain" was initially released on Lanegan's second solo album, Whiskey For The Holy Ghost, in 1994. The album also features cover versions of Neil Young's "Through My Sails," and The Rolling Stones' "No Expectations." An instrumental titled "End Title Theme" is also included as a hidden track after "No Expectations" ends.

Soulsavers' third album, Broken, was released on August 17, 2009. Mark Lanegan once again featured as the main vocalist. Other prominent musicians such as Mike Patton (of Faith No More, Mr. Bungle, Tomahawk and other projects), Jason Pierce (of Spiritualized and Spacemen 3), Richard Hawley, and Gibby Haynes (of Butthole Surfers) also feature on the album. The non-album single Sunrise, a song written by Lanegan and sung by Will Oldham, preceded the album release on August 3, 2009. The B-side is a cover of Palace Brothers' "You Will Miss Me When I Burn," a song written by Oldham and sung by Lanegan, that also features on the Broken album.

Machin and Glover are also making headway as film score composers, with a portfolio of work that includes the feature documentaries BattleGround: 21 Days on the Empire's Edge produced by the Guerrilla News Network. Their song Revival was featured on the November 22, 2007 episode of Grey's Anatomy, titled "Crash Into Me" part 1. The song was also featured on the December 10th episode of Friday Night Lights, "The Giving Tree." It is also featured in the snowboarding movie That's It, That's All.

The Light The Dead See

It's Not How Far You Fall, It's The Way You Land