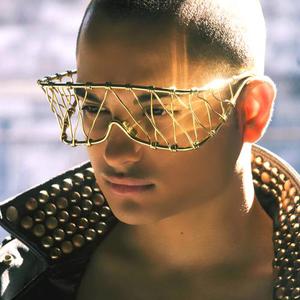 There are at least two artists named Solomon: 1. Solomon is a Electronic Hip-Pop artist from New York. 2. Solomon Cutner CBE (known professionally as Solomon) was a British pianist 1. The musical journey that Electronic Hip-Pop singer, rapper, producer /songwriter Solomon has been on hasn't exactly been that of a typical pop pedigree.? Based in New York City, yet born in San Diego, CA half Puerto Rican, half African-American ...

1. Solomon is a Electronic Hip-Pop artist from New York.
2. Solomon Cutner CBE (known professionally as Solomon) was a British pianist

1.
The musical journey that Electronic Hip-Pop singer, rapper, producer /songwriter Solomon has been on hasn't exactly been that of a typical pop pedigree.? Based in New York City, yet born in San Diego, CA half Puerto Rican, half African-American , Solomon has had to live through some of life's hardest challenges including his? own adoption, coming out, family drug addiction and even his own father's incarceration. ? Yes, he's had to grow up quickly, but in the end, this genre-jumping artist is armed with an arsenal of life experience to sing and rap about.

Having always been involved in music and writing from an early age and using music as his method of escapism, Solomon enjoyed his times as a young choirboy and soaked up the heavy influences of his pop idols like the late, great icon that is Michael Jackson and even more so by his feisty and sister Janet Jackson as well as Elton John and Madonna.? Drawing huge influences from his muses like The Notorious B.I.G. and an undying obsession with Lil' Kim and other 1990s rap and R&B artists ? hip hop with an urban edge remains deeply rooted in Solomon's efforts to make accessible and relevant pop music today.

Having started up his own record label (SolRay Records), Solomon released two mixtapes in 2008, garnishing him a spot on Eminem's Sirius/XM's Shade45 morning show ?Cipha Sounds Morning Show.? Solomon then recorded his debut EP ?Shades of Black? in 2009 after a tough and trying relationship and breakup.? When reflecting back upon it now, Solomon describes ?Shades of Black? as a ?really sad and frustrating record based on aggression?. ? Having experienced hardship and anger growing up, it was much easier for Solomon to write raps at the time, rather than pop songs. ? Although his debut EP and even earlier mix tapes highlighted more of a darker side to Solomon, ?Shades of Black? showed massive potential with its mainstream urban and electronic sensibilities combined with clever lyrical rhymes - both of which caused a minor, yet overall positive rumble among the pop music blogosphere.? ?

Enter 2011 and Solomon released his highly anticipated record called ?THE LOVE ROCKER PROJECT? ? a collection of exciting and uber fresh pop tracks that pack a stylistic and vivid bang - inspired by color and movement ? something not represented in his previous recordings.? Take for instance club anthem ?Wit Us U Can't...? which explores more of Solomon's confident exterior with a killer rap and dub step breakdown that would make even Britney Spears go green with envy.? The music video for the song debuted on MTV network LOGO on NewNowNext: PopLab. His California anthem ?West Coast !$#? infiltrated the clubs and dance market with remixes from Jason Nevins, Digital Dog and Uniting Nations. Solomon later embarked on a tour opening up for Patti LaBelle and Deborah Cox reaching cities nationwide including New York City, West Hollywood, Boston and more.

?THE LOVE ROCKER PROJECT? has given Solomon the chance to fully realize all the crazy creative genius going on artistically inside his head.? The future looks hopeful for this rising pop star that has lived through the worst and come out of it a polished and confident performer with heaps of potential.? Having been hailed a brilliant rapper in the hip hop world and honing in on his creative prowess for his new pop record ? you can bet that once you hear the music of Solomon, it will stick with you for awhile ? and that's something you definitely can't mess with.

Solomon Cutner was born in the East End of London in 1902. He was a child prodigy whose talent was recognised at the age of seven when, having had no formal tuition, he performed his own arrangement of the 1812 Overture on the family piano. He gave his first concerts in 1912 at the age of ten, retired from public performance in his teens and then resumed his career as an adult performer. He began making records in 1929. As a child he was sent to live with his teacher, Mathilde Verne, who had studied with Clara Schumann. It is documented that Verne abused and exploited her young charge. Solomon brought to his playing an effortless virtuosity, great respect for the printed score, and deep spirituality.
He toured abroad a good deal, particularly during and shortly after World War II, when he gave numerous much-cherished recitals in the United States and Australia. He premiered the Piano Concerto by Arthur Bliss at the 1939 New York World's Fair. Known especially for his Beethoven, which has an almost legendary status (he broadcast the entire cycle of the 32 piano sonatas), he was in the midst of completing the complete cycle of the sonatas for EMI Records when he suffered a devastating stroke in 1956, which paralyzed his right arm. He never recorded or performed in public again, but lived another 32 years. His recordings of Mozart, Schumann, and Brahms are also highly regarded.
He was appointed a Commander of the Order of the British Empire (CBE) in 1946.
He died in London in 1988, aged 85.

State Of Our Affairs

Come With Me / Papi Ven Aqui