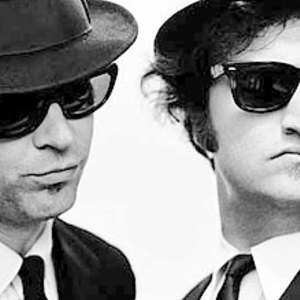 The Blues Brothers are an American blues band founded in 1978 by comedians Dan Aykroyd and John Belushi as part of a musical sketch on Saturday Night Live. Belushi and Aykroyd, respectively in character as lead vocalist "Joliet" Jake Blues and harpist/vocalist Elwood Blues, fronted the band, which was composed of well-known and respected musicians. The band made its debut as the musical guest on the April 22, 1978, episode of Saturday Night Live.

The band then began to take on a life beyond the confines of the television screen, releasing an album, Briefcase Full of Blues, in 1978, and then having a Hollywood film, The Blues Brothers, created around its characters in 1980.

After the death of Belushi in 1982, the Blues Brothers have continued to perform with a rotation of guest singers and other band members. Aykroyd reunited the original band in 1988 for a world tour and again in 1998 for a sequel to the film, Blues Brothers 2000. Aykroyd and the band, occasionally joined by Belushi's brother Jim, make regular appearances at musical festivals worldwide.

Blues Brothers And Friends: Live From Chicago's House Of Blues

Unforgettable Soundtracks of the Century

Best Of The Blues Brothers

Made in America (Vinyl)