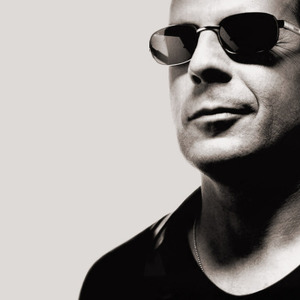 Bruce Willis, born March 19, 1955, is a popular film actor and singer. His first release was a track on the "Moonlighting" soundtrack, followed by his successful solo album The Return of Bruno. In the years since, he has occasionally returned to the recording studio for various film soundtracks and guest appearances. His current prject is the band Bruce Willis and The Accelerators. Willis was born in Idar-Oberstein, Germany, the son of a Kassel-born German mother, Marlene, who worked in a bank, and David Willis, an American soldier.

Willis was born in Idar-Oberstein, Germany, the son of a Kassel-born German mother, Marlene, who worked in a bank, and David Willis, an American soldier. Willis was the oldest of four children. After being discharged from the military in 1957, Willis's father took his family back to Penns Grove, New Jersey, where he worked as a welder and factory worker. His parents separated in 1971 while Willis was in his early teens. He was always an outgoing youngster, although he grew up with a stutter. Willis attended Penns Grove High School in his hometown. Finding it easy to express himself on stage and losing his stutter in the process, Willis began performing on stage and his high school activities were marked by such things as the drama club and school council president.

Rather than go to college after graduation, Willis became a blue-collar worker, transporting work crews at the DuPont Chambers Works factory in Deepwater, New Jersey. He decided to quit after a colleague was killed on the job, and thereafter became a regular at several bars. Willis also discovered an innate knack for playing harmonica and joined an R&B band called Loose Goose. After a stint as a private investigator (a role he would play in the television series Moonlighting as well as in the 1991 film, The Last Boy Scout), Willis returned to his original passion of acting. He enrolled in the drama program at Montclair State University, where he was cast in the class production of Cat on a Hot Tin Roof with Jack Prince as Big Daddy, William Applegate as the doctor, and Kevin J. Lynch as the Rev. Tooker. Willis left school during his junior year and moved to New York City.

Willis returned to the bar scene, only this time for a part-time job and as a way to meet New York celebrities. After countless auditions, Willis made his theater debut in the off-Broadway production of Heaven and Earth. He gained more experience and exposure in Fool for Love, an appearance on television's Miami Vice, and in a Levi's commercial.

If It Don't Kill You, It Just Makes You Stronger

The Return Of Bruno