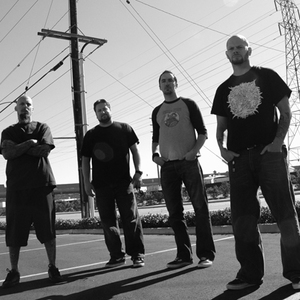 The band 16 was formed in Santa Ana, Ca. by Bobby Ferry (guitar), Cris Jerue (vocals), and Jason Corley (drums) in 1992. Finding a lasting bass player was a problem until Tony Baumeister joined in 1993. The band's first full-length album entitled "Curves That Kick" was released in 1993 on legendary artist Pushead's label "Bacteria Sour." Working with Pushead enabled the band to have the album released in Japan, as well as the opportunity to tour Japan, which happened in the summer of 1994.

The follow-up record "Drop Out" was relased by Pessimiser/Theologian records in 1996 (although it was recorded nearly two years earlier). It received critical acclaim, but the band did not tour, and only performed locally and semi-locally.

Jason Corley was ejected from the band at the end of 1994, and replaced by Andy Hassler. Phil Vera was also added as a 2nd guitarist. The band released "Blaze of Incompetence" in 1997 (again on Pessimiser/Theologian), and did a US tour with Grief in 1998. Andy Hassler was fired shortly after the tour. R.D. Davies replaced Andy, but he overdosed on heroin 6 months later and was replaced by Mark Sanger. The next album, "Zoloft Smile," was recorded in 1999/2000, but wasn't released until 2002 by At A Loss Recordings. By the time the album was actually released, Bobby and Tony had both quit the band. The rest of the guys carried on with Phil being the lone guitar player. Nial McGaughey and later, Rafa Martinez handled bass duties. Phil took over vocal duties in 2003, after Cris was forced to go to rehab for alcohol and drug dependency. The band toured the US and Japan as a three-piece (Phil, Mark, Rafa), until calling it quits in 2004.

The band reunited in 2007 (Bobby, Cris, Jason, Tony) and subsequently got a deal with Relapse Records. Their Relapse debut, "Bridges to Burn," was relased in Jan. 2009. The band parted ways with Jason Corley again, and recruited Mateo Pinkerton (ex Buzzov-en, Crom) as their new drummer. The band toured Europe in March and June of 2010, culminating in an appearance at Hellfest in France. They are now writing the follow-up to "Bridges to Burn," and planning upcoming tours.

Lifespan of a Moth