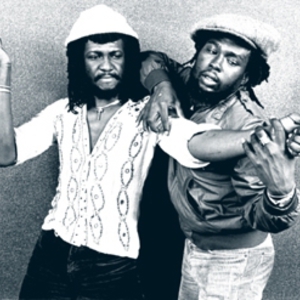 Sly & Robbie may well be the most prolific recording artists ever. One staggering estimate is that they have played on or produced some 200,000 songs. Sly & Robbie are reggae's longest lasting production team. The rhythm section of drummer Lowell Dunbar (nicknamed Sly after Sly Stone, one of his favorite musicians) and bass guitarist Robert Shakespeare started working together in the mid 1970s, after having established themselves separately on the Jamaican music scene.

Before joining forces, Sly was drumming for the Skin Flesh and Bones band and Robbie was the bass player for the Aggrovators. They also used to play in clubs (Sly at Tit for Tat and Robbie at Evil People), and used to check each other out. They found out that they had the same ideas about music in general (both are huge fans of motown, philly sound and country & Western, in addition to Jamaican legendary labels Studio One and Treasure Isle), and reggae production in particular. They first worked together for the newly created Channel One label and studio, operated by the Hoo Kim brothers.

They changed the face of reggae several times: in 1976, they introduced a harder beat called "Rockers", which quickly replaced the then prevalent "One drop" style, then introduced the "rub a dub" sound in the early 1980s. Sly and Robbie were important in developing the trend towards computer assisted music and programmming in the mid 1980s.

Also in the early 1990s they introduced a novel sound with the hits "Bam Bam" and "Murder She Wrote" by Chaka Demus & Pliers. Chaka Demus' rough DJ vocals were matched with Pliers' sweet, melodic, soul-influenced singing; this unusal vocal pairing was championed by Sly and Robbie. This formula has since been used with great success by the likes of Shaggy (who teamed up with singers Rayvon or Rik Rok), Shabba Ranks, Maxi Priest and others. This predates and may have influenced the recent trend in some rap music where a song's "hook" or chorus is sung by a guest, while the verses are rapped.

Sly & Robbie continued to innovate during the 1990s and early 2000s, fusing Dancehall and Latin music sounds (La Trenggae) or Dancehall and hip hop/R&B (their 2004 Big Up riddim). In 2001, their "Strip to the Bone" album paired them with electro producer Howie B, and together they explored new dub territories.

Far from restricting themselves to the Jamaican scene, (in which they have played for virtually every prominent Jamaican musical artist from Beenie Man to Sean Paul to Peter Tosh, Black Uhuru, Gregory Isaacs, Dennis Brown and others), they have been one of pop music's most sought after rhythm sections, playing for and producing superstars such as Bob Dylan, Mick Jagger, the Rolling Stones, Grace Jones, Joan Armatrading, Gilberto Gil, Joe Cocker, Serge Gainsbourg, Simply Red, Michael Franti, Sting, Khaled, Tricky, Doug E. Fresh, Carlos Santana, Sin&eacute;ad O'Connor, and many more.

They have produced No Doubt's hits 'Hey Baby' and 'Underneath it All'. They also produced some tracks off Suggs first album 'The Lone Ranger' including the hit version of Cecilia featuring Louchie Lou and Michie One which sold over 500,000 copies in the UK alone.

After 30 years together, they still tour and record relentlessly. Their last US tour was with Tony Rebel and Half Pint, during the Spring of 2005. During the Summer of 2005, they toured Europe and the UK with Bunny Rugs, lead singer for Third World. During the Fall of 2005 they were on the road with Sin?ad O'Connor and in August 2006, they appeared with Don Carlos at the Reggae on the River Festival, while they backed Cherine and Queen Ifrica in 2007 and early 2008.

They have produced several new Jamaican artists for their TAXI label, including Kibaki, Mynimoo and Zennlocc, as well as confirmed superstars such as Elephant Man. They have also recorded with their original group, the Revolutionaries, to produce Horace Andy's new album "Livin' it up" (2007). They recently signed the lovers rock sensation Bitty McLean to their TAXI label and are planning to release "MOVIN' ON", Bitty's new album, during 2008.

The Reggae Power (With Spicy Chocolate)

Drum & Bass Strip To The Bone (With Howie B)