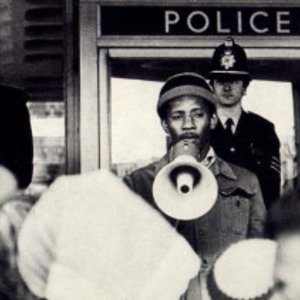 Linton Kwesi Johnson (aka LKJ) (born 24 August 1952, in Chapelton, Jamaica) is a British-based dub poet. He became only the second living poet to be published in the Penguin series. His poetry involves the recitation of his own verse in Jamaican creole over dub-reggae, usually written in collaboration with renowned British reggae producer/artist Dennis Bovell . Most of Johnson's poetry is political, dealing mainly with the experiences of being an african-caribbean in Britain.

Most of Johnson's poetry is political, dealing mainly with the experiences of being an african-caribbean in Britain. However, he has also shown himself more than capable of writing about other issues, such as British foreign policy or the death of anti-racist marcher Blair Peach. His most celebrated poems were written during the government of Prime Minister Margaret Thatcher. The poems contain graphic accounts of the often racist police brutality occurring at the time.

When written, Johnson's poetry makes clever use of the unstandardised transcription of Jamaican Creole.

Of late, Johnson has only performed live on an intermittent basis.

Johnson's record label LKJ Records is home to other reggae artists, some of whom made up The Dub Band, with whom Johnson mostly recorded, and other Dub Poets, such as Jean Binta Breeze.

Straight To Inglan's Head (An Introduction To Linton Kwesi Johnson)