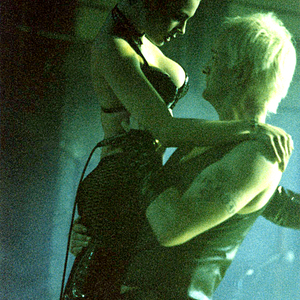 SLEEP CHAMBER is an American Industrial band fronted by John Zewizz. He was born in Essex England in August of 1955. The band is known for using Individuality, Eroticism and Magick imagery on their art work,and within their lyrics. during their performances,they are known to use a 'special blended' narcodic incense. Formed in 1981 by friends John Zewizz, Eugine Difrancisco, and Phil Brosseau.they started a black uniform theme when 'punk' was popular.

,ZEWIZZ was evolving the early style to whats known today as GOTHIC. Over the years the SLEEP CHAMBER line up has changed many times with John Zewizz being the sole permanent member. Previous members of SLEEP CHAMBER have included,Larry Van Horn,(7:FROM LIFE) Ashley Swanson,Malcolm Smith,(DOKUMENT PROJECT) Darline Victor,Richard Geller,Craig Wein,Andrew Woolf,,Arthur PW,Tione,Jonathan Briley,(solo artist), Thomas Thorn, Michael Moynihan,and Elaine Walker(ZIA / DDT). Since the beginning John Zewizz has stated that the constant line up change is because SLEEP CHAMBER is not a "band", but rather a "concept".

From 1982 to 1999 SLEEP CHAMBER put out a considerable volume of music (releasing over 70 recordings, and participating in over 35 various artists releases). After a extended absence, SLEEP CHAMBER returned in 2008 with a new line up, a slew of new releases, and a new name, SLEEPCHAMBER.as a single title for his concept.

1981 - 1990
Sometime between 1981 and 1982 Sleep Chamber came into existence featuring John Zewizz, Eugene Difrancisco and Phil Brosseau. Zewizz, Difancisco and Brosseau were friends .. Both Difancisco and Brosseau fronted a band called THE PRODUCT and John had worked as a producer on their one and only single. When THE PRODUCT folded Difrancisco and Brosseau began a band called DAZE OV TRANCE, John occasionally helped out with DAZE OV TRANCE on Keyboards, even playing on a cassette release as part of the band. Eventually the three recorded with John as the front man in a band they called SLEEP CHAMBER.[4] Very early works were experimental and electronic/industrial in nature. Live SLEEP CHAMBER performances were quickly labeled as resembling a "Black Mass", with smoke (containing a special blend of incense) billowing out of fog machines, and the band donning black bondage masks while performing on stage. Their concerts scared some local club owners prompting them to ban SLEEP CHAMBER from playing. Local reviewers often accused the band of being Satanic. Zewizz, over the years, has denied this accusation.[5] These early concerts featured Zewizz in different combination's with Difrancisco, Jonathan Briley,,Larry Van Horn Moynihan and also Malcom Smith (whom Zewizz collaborated with in the bands DOKUMENT PROJECT & HIDIOUS IN STRENGTH.
Zewizz also found the time and music to start a girl concept called WOMEN OF THE SS. Which to his surprise has become almost as popular in the underground as SLEEP CHAMBER if not more popular.
1990 - 2001, SLEEPCHAMBER and Their BARBITCHUETTES
It was during the 1990s John incorporated bondage/fetish dancers called THE BARBITCHUETTES in to SLEEPCHAMBER live performances. With this addition SLEEPCHAMBERr's popularity exploded. During live shows their BARBITCHUETTE dancers would perform S&M acts on the stage as well as caressing and dancing with other BARBITCHUETTE dancers.Some performances even included female sex acts ! During THE BARBITCHUETTES hay-day with SLEEPCHAMBER it was not uncommon for the band to travel with up to 11 BARBITCHUETTE dancers One New Years Show included 18 BARBITCHUETTES all in fetish gear that even included a genuine 'Catwoman' leather mask & full body suit.

The 1990s also started off with John's biggest hit yet with the SLEEPCHAMBER release "SLEEP,OR FOREVER HOLD YOUR PIECE" (a vinyl LP & VHS release). This new popularity also resulted in wider distribution for John's music. SLEEPCHAMBER saw their material expand from the Inner-X-Musick to distribution overseas and in the U.S. by the Italian label Musica Maxima Magnetica and the German label F?nfUndVierzig that reissued their complete vinyl catalog ov 10 LPs to CDs and continued to release new material on CD & DVD .Cleopatra Records out of Los Angeles.soured Zewizz from branching out too much by voiding their contract with him and not paying royalties. They were also caught selling SLEEPCHAMBER music downloads 10 years after the voided contract between them. Along with bigger sales came bigger opportunities. SLEEPCHAMBER required ever bigger venues. The increased popularity also allowed SLEEPCHAMBER to do two quick tours of Texas in the late 1980s and early 1990s. These tours featured Zewizz along with Briley, Tione, Difrancisco, and Arthur PW. At the end of the Texas tour, John found himself again looking for a new collaborator with the departure of Arthur PW and Briley.

Elaine Walker entered the picture in 1991/92 to fill that void. Walker's band DDT had frequently played with SLEEPCHAMBER at local venues around the Boston area. Walker was a Berklee College of Music graduate and teacher. She impressed John with her abilities. Zewizz and Walker, together with the help of Ashley Swanson, began working on the CD SIAMESE SUCCUBI. Sales of this record were even better than "SLEEP,OR FOREVER HOLD YOUR PIECE"7] A successful "LEATHER & LUST TOUR" of California resulted featuring Zewizz, Arthur PW, Swanson and long time friend and collaborator Difrancisco. Although pleased with the line up, Zewizz was aware that Elaine Walker's commitment was to her other projects and she did not plan to stay with SLEEPCHAMBER. she left the band after SIAMESE SUCCUBI. Additionally by the end of the LEATHER & LUST TOUR of California friction arose between Zewizz and Difrancisco. Upon returning to Boston, both Arthur PW and Difrancisco left the band. Sometime later Arthur PW passed away. az did Zewizz's soul mate girlfriend Laura Graff-(who was also a BARBITCHUETTE).

Again John introduced a new SLEEPCHAMBER line up of Ashley Swanson and Craig Wien, as well as help from Andrew Woolf and Jay Keegan. This line up was the last recording version of SLEEPCHAMBER with a new release of "SOME GODZ DIE YOUNG"-(EP-CD & full CD). Their recordings started to end up on several releases, predominantly SIRKUS,-CD SACROSANCT-CD ,SOPOR CD, SLEEPING SICKNESS-CD and SONOROUS INVOKATIONS OV BRIAN JONES-(vinyl 10"LP & CD) - the line up had now become Zewizz , Woolf. and Wein However, drug addiction, personal problems the death of his girlfriend Laura Graff and constant touring had ceased John's steady flow ?new? music by the end of 1997..

Real problems began back in 1995, when John was questioned for the murder of Karina Holmer, a Swedish au-pair living in Boston. Karina's body was found dismembered in a dumpster not far from John's home.It was being called "THE NANNY MURDER" and The police considered John a suspect, but no charges were ever brought. The accusation, coupled with a growing heroin addiction, quickly began to destroy the band and drove John away from band and friends.

Despite those problems, SLEEPCHAMBER took on its most ambitious project to date in 1997, a tour of Germany. Unable to get commitments from the current line-up of SLEEPCHAMBER John took on two new member (Scott Walker and Tyler Newman) as band mates (which he never met till the start of this new tour of Germany. Along with these new members, John took BARBITCHUETTE dancer "Lulu" (aka CATWOMAN) . "Lulu's" job during the tour covered dancing during the shows, and recruiting dancers from local strip clubs. From the USA,and Germany. Andrew Woolf organized the booking of the German tour,,.in which after a month of touring the German tour manager fled with over $25,000. Leaving John in yet another slump.

There are many stories of John's escalating drug addiction during the tour, and although the band was deceived by the promoters, the shows were well received and the seeds for a large European fan base were set because of the tour. As they saw his life beginning to get out of control, friends WOMEN OF THE SS tried to help John after returning from the German tour with a benefit concert.

Despite the problems, releases continued .by SLEEPCHAMBER. CDs were reissued and new titles slowly started to be released, it kept up the appearance of productivity without much new material being recorded. After the German Tour, SLEEPCHAMBER only performed two more times. The first was the 1997 benefit concert (with Zewizz, Newman, and Walker). 2000 saw the last Sleep Chamber show on December 31. This last show featured John and new collaborator B. Avakian as well as BARBITCHUETTE dancer Semiramis.The show was a 'sell-out' but Zewizz ws not into it at all... The final blow was in 2001 when BARBITCHUETTE dancer and then girlfriend of Zewizz, Laura Graff died of an apparent drug overdose. Zewizz was questioned by police in the suspicious death before it was ruled an accidental heroin overdose.

2001 - present - SLEEPCHAMBER
Although out of the public eye, John never stopped recording. In 2004, he was able to overcome his heroin addiction and began remixing and recording SLEEPCHAMBER material with a new enthusiasm. In 2004, he released a limited edition CD titled SOUNDTRAX . In 2007, Zewizz announced a new band line-up...Gimmie Sparks-(on Guitars) and long time collaborator Bob. Avakian-(percussion & keyboards) This new line up was featured on the 2009 release STOLEN SLEEP and SORCERY,SPELLS & SERPENT CHARMS. Since 2009 SLEEPCHAMBER has released over 5 CDs (on Klanggalerie,a new version of SATANIC SANCTION from 1988 was released containing all the tracks from the sessions) Old Europa Cafe,from Italy released a solo CD by Zewizz "2012"... and Zewizz's own label Inner-X-Musick), and released several CD releases featurring STRIPTEASE,,SACRAFICE,,,STOLAS,,,STRATOCAST,,,SILVERSTAR-(X-Mas CD-EP),and a CD in a DVD box ov their best tracks from The German Tour called "SPECIES INTERRUPTUS"...There also was a few compilation CD releases of Inner-X-Artists...one called "THEE MUSICK OV MAGICK" SLEEPCHAMBER performed its first Live performance in nearly 10 years with a Live FM Broadcast on WBRS-Radio one. On January 1st 2010. The result waz a release ov a strict limited edition of the show on CD titled "STRATOCAST"...The band line-up featured ZEWIZZ,GIMME SPARKS,BOB AVAKIAN,TICK( and ZORA on back vocals). Only 100 copies ov the CD were manufactured and remain quite rare..
In 2011 SLEEPCHAMBER Performed a Show on Halloween after 10 years of not playing out publicly. Only 123 people were allowed to this 32nd year party. They have currently released a New CD of earlyer material from the "SEXMAGICK/SIRKLE ZERO" sessions on PANICMACHINE RECORDS. The first 100 copies of the new CD "SEREMONY" were issued with a set ov 'tarot cards'. Their official video channel was removed in September 2012 for uploading a "age restricted' video for the 3rd and final time. U-TUBE took down over 276 videos,which effected the complete SLEEPCHAMBER & WOMEN OF THE SS video network. ZEWIZZ has started a video documentry on U-TUBES no due process and unfair termination ov THE OFFICIAL SLEEPCHAMBER VIDEO DEN.
SLEEPCHAMBER waz in the middle ov uploading their newest release "SCOPOLAMINE" az a FREE Download on their channel.(when it waz terminated). The trax are somewhat scattered around the U-TUBE network. ZEWIZZ states "It will take much more than this to kill SLEEPCHAMBER...The Ultimate Minority"...and suggests that anyone join his "JOHN ZEWIZZ SOCIETY" site...as membership is limited and all videos will be moved to that site along will many hours "32 YEARS WORTH" says ZEWIZZ..for FREE. ZEWIZZ also requests that fans & friends boycott any downloads from anyone but him, "NO ONE SHOULD BE PAYING FOR ANY SLEEPCHAMBER DOWNLOADS...THESE PARASITES ARE LEACHES" and they are stealing his only income.. Zewizz's current project iz a release of a WOMEN OF THE SS-DVD.

The Sun May Speak Of Pleasures Promo (EP)