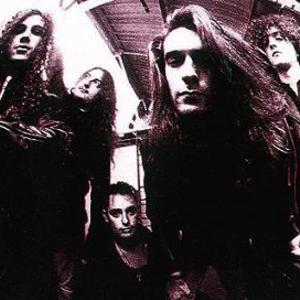 Slammer one of the first UK thrash bands to sign a major label deal with WEA in the 80's. The first release on WEA was a 10" 4 track featuring two tracks from the BBC Friday Rock Shows sessions Born for war and Hellbound and two live tracks from a show in Bradford If thine eye and fight or fall. "The Work Of Idle Hands" was released shortly after tours took place with the likes of Onslaught Acid Reign, Xentrix ...

"The Work Of Idle Hands" was released shortly after tours took place with the likes of Onslaught Acid Reign, Xentrix , Toranaga Celtic Frost amongst others sadly sales failed to match up with the budget spend on the album and promotion and Slammer were duely dropped only two resurface on Heavy Metal Records a couple of years later.

The first release on HMR was the four track Insainity Addicts which a video was shot for the other three tracks on this release showed strong Metallica influences and a foresight into the future of Slammer who had once been the one of the major uk thrash acts now they were reduced to support slots in a transit van sad considering the talent they had on offer.

1991 saw them release their 2nd full length album nightmare scenario which has a superb cover the artist Koot based in Bradford had also recently done the Almighty's Soul Destruction cover. NS contained which wouldn't have been out of place on the Black album of the same year however lack of support on a the Record label equivalent of a morgue had already hammered the final nail in the lid of Slammers coffin.

The Work of Idle Hands