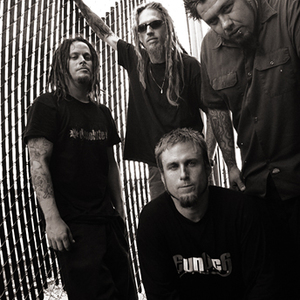 Formed is 1994 in San Francisco, California by Singer/bassist Steev Esquivel, former guitarist Mike Roberts and drummer Paul Hopkins, Skinlab quickly began making a name for itself in the Bay Area music scene. This brought attention from Machine Head's Robb Flynn, who would go on to help the band secure it's first record deal and their first sold out European tour. Their appearance at the 1997 Dynamo Open Air launched the band into a fury of tours both European and State Side, in support of the debut album Bound Gagged and Blindfolded(Recorded by legendary metal producer Andy Sneap).

With the departure of Roberts in 1998, the band quickly recruited guitarists Scott Seargant (Killing Culture) and Snake (Skrew)and went into writting mode. These sessions led to the Eyesore E.P which introduced the new line up (Available as a limited edition release of only 5000 copies which to this day remains a cult classic with fans worldwide). In 1999 the band entered El Paso's Village studio, again with producer Andy Sneap, to record Disembody: The New Flesh. The album went on to become an underground favorite for die hard metal fans around the globe. 18 months of touring would follow, with the band sharing the stage with the likes of Exodus, S.O.D, Fear Factory, the Deftones, Coal Chamber, Deicide, Entombed, and Napalm Death. 1999 would also see the band making another appearance on the main stage of the Dynamo Open Air Festival.

In 2003, Skinlab parted with guitarist Scott Seargant, and introduced Glen Telford to the line up. With Telford onboard, the band recorded The Revolting Room, which to some, was the highlight of the bands recording collection. Revolting Room saw the band move in more of a heavy/melodic direction, both in terms of song writing and production. This time the band worked with Producer Steve Evetts (Hatebreed,Glasjaw), bringing in Andy Sneap to round out the ulitmate mix of metal fans have learned to love.

The Revolting Room touring cycle saw the band share the stage with such acts as Hatebreed, Superjoint Ritual, Arch Enemy, Soil, and In Flames. They would hit stages from London to El Paso, making friends and new fans by the thousands. After a successful run of dates on the JagerMusic/Slayer Tour, the band decided to take a break and explore other musical adventures.

After a 4 year hiatus Skinlab, returned to the road with the "The Face Of Aggression" tour. This tour saw the band bring back it's furious stage presence and 'in for the kill attitude', culminating with a June 3rd 2007 performance at The Oakland Metro. This intense performance was captured for a future DVD and live album release.(04/29/2008 Skinlab return with the release of "SkinnedAlive!" through BCD Music Group).

The band is hard at work, writing the next full length album "The Scars Between Us", which will be released on September 15th, 2009.

The Scars Between Us