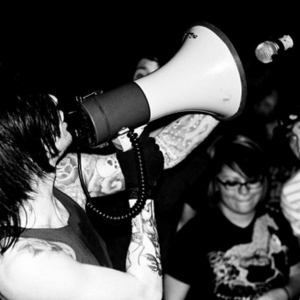 Showbread is a Raw Rock band from Guyton, Georgia. They were signed to Tooth and Nail Records, but recently signed to Come & Live!. They are known for their spastic vocals and energetic live shows. They are also one of the few bands of their genre to use a keytar. They tend to change their style of music from one album to the next. The band had two full time vocalists until Ivory Mobley's departure in 2007.

Josh Dies, the band's primary vocalist, is also an author, penning The Spinal Cord Perception, Nevada, and The Insect. Showbread gained media attention when, in 2006, a fan made video for the song ?Dead By Dawn? was featured on YouTube. The video was seen by the band and posted on their own site, giving rise to controversy over Showbread's lyrical themes. According to Matt Davis, the band's name comes from "a biblical reference that Jesus used to show how Christianity isn't so much about rules but about love."

Showbread is known for giving ridiculous statements in the press and in interviews. Most interviews, regardless of purpose, vary from nonsense to outright absurdity, becoming serious only when answering questions dealing with their faith. They have made many absurd claims, ranging from the accusations that Blindside's members are vampire, werewolf, and zombie hunters, to accusations that Pillar's band members are made of grass clipping. Despite the nature of many of these statements, it appears they were meant to be taken in a light-hearted manner.

Very open with their Christianity, the group has even been known to point out that the only serious things they will say during their set are those that deal with their beliefs. Showbread also give whimsical names to their headlining tours like "Kings Of Krunk" and "To'...Fo' Sho'" and even reportedly suggested that their 2006 tour with the band Roses Are Red be titled "Dookie Eaters Anonymous," due to a re-occurring joke between vocalists Mobley and Porter.

They are known for wearing matching outfits when performing to promote their albums, such as red and black for No Sir, Nihilism Is Not Practical and black and green for Age Of Reptiles and more recently, Doctor and Nurse outfits for their next two (and simultaneous) releases, Anorexia and Nervosa, both of which are one half of a storyline involving two sisters, respectively named.

The Fear Of God was released on August 11, 2009, which combines all the skills, elements and tricks the group has learned on their previous outings, showing the world exactly what Raw Rock is and showing new listeners exactly what they're up against.

"Who Can Know It?" was released on Come & Live! records on November 16th 2010. The album was made available for free on Come & Live's website by the band.

"Cancer,"was released in 2012 and is to be accompanied by a science fiction film, written by Josh Dies. The project is crowd-funded through Kickstarter. The album is available for free from comeandlive.com: http://www.comeandlive.com/CLD/Cancer/

Who Can Know It

The Fear Of God

No Sir, Nihilism Is Not Practical

Life, Kisses And Other Wasted Efforts

Human Beings Are Too Shallow To Fall In Love (EP)