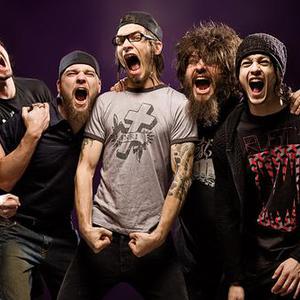 Shaka Ponk (sometimes abbreviated as SHKPNK) is a French electric-rock band created in 2000. They mix different forms of popular music into their songs in addition to world music although predominately with a electronic-rock sound. Lyrics are written mostly in a mixture of English, French and Spanish languages. Shaka Ponk is a Paris-based band that has created a sound that blends electro, rock, punk, and dance with a stunning live show that combines advanced digital animation with an unsurpassed display of energy from the band members.

Shaka Ponk got its start between Paris and Berlin in 2005 from a concept that brings together music, imagery and activism. The former web designer and imaginative frontman of the group, Frah, along with guitarist, CC, came up with a highly original project that combined conventional rock-n-roll elements (dirty guitar riffs and cardiac stimulating beats) with new techniques such as VJing, which mixes sounds and images around an animated monkey character named Goz who is as much a part of the group as the other five members. Since then, the band has been extremely active online creating complex videos and innovative motion graphic work as well as their own online channel, "Monkey TV".

The Black Pixel Ape (Drinking Cigarettes To Take A Break)

The White Pixel Ape (Smoking Isolate To Keep In Shape)

The Geeks And The Jerkin' Socks?

The Geeks and the Jerkin' Socks