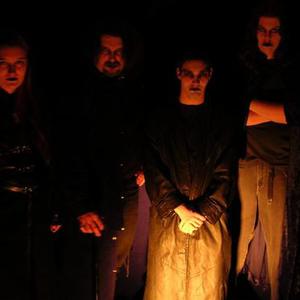 13 Winters was originally founded by Roy, Diana and Mike in the autumn of 2001 in United States. Joined with Dan on guitar and Pat on bass, they made the dark embrace demo. They originally gave it away for free from their website. Over 300 copies were distributed across the country and some over seas. It was very well received by all who got one. Unfortunately, Dan wanted to go a different direction and left the band in early winter of 2003. He was soon replaced by Matt in mid-winter of 2003. This was the start of a long period of difficulties that would plague the band for three more years.

In spring of 2003, Pat left to join Hollow Image, which was a band he was far better suited for. In the winter of 2004, Roy, Diana, Mike & Matt recorded their first full length album Where The Souls Wander in Roy's home studio and released it through his own label, Dark Valley Records. Due to a poor quality monitor system and too many people getting their hands into the mixing pie, the album's mix was bad. Also during the recording process, Matt's inexperience on guitar became evident. Unfortunately, the band refused to see it due to both a close friendship with Matt and the lack of any suitable guitarist in sight (Maine is very scarce when it comes to musicians). They also passed the mix as ?Good enough? only later to see that sound quality was the first complaint they would hear, the guitar work being the second. This caused the band to not push the album as much as it should have been out of fear that it would be damaging. In the fall of 2004, Casey Chick joined them on Bass and they played LocoBazooka in front of 20,000 people along with bands like Damage Plan, Kittie, Shadows Fall, Candiria, All That Remains, Clutch and many more.

Over the next three years they would play many shows all over the north east region, appearing at many more festivals and playing with more national acts. Over this time they kept gaining and losing members. Every time they would get a new one, that person would have to be brought up to speed. While they would be working with that person, someone else would leave for whatever reason. One thing the band was sure of was that none of the string player they took in fit like Dan and Pat.

Early in 2006, they took a live recording that was made from the mixboard at Jarrod's Place in Attleboro Mass and release it as a live album "Down Below Zero". While the bands knew this release wasn't going to be a very good one, they viewed it as honest. There was no music make-up on this recording to make themselves sound perfect. Not too many bands would dare make such a release.

In the summer of 2006, the band lost all its members. Only the original three were left. After taking a couple months to do some soul searching, they were faced with the question. Keep going or throw in the towel? For close to six years had past and in this time they had been through (ironically) thirteen members. Every time they seemed to get back on their feet, something happened to yank the carpet out from under them. They announced on the internet that the band had finally broken up. This caused a slew of fans who had not been known to come out of the woodwork. As it turned out that 13 Winters had become one of the most well known bands in Maine. Their name had also spread across the country and to some countries over seas. This made the trio decide that they weren't going to give up. The immediately began a far and wide search for a guitarist spanning almost the entire state of Maine. They were determined that this time they were not going to settle. They were going to find the guitarist they've been missing all those years. And this time, instead of just trying to find a replacement, they were going to act like a brand new band and focus on how this new person wrote with them.

During this search, they literally shoved a bass into Diana's hands and dubbed her their official bassist. After a month of looking, they got an email from a woman who informed them that her husband, Jeff, loved the band and was a very talented guitarist. They soon set up an audition. Almost immediately they began writing some new songs. For the first time in years the band now has full confidence and a positive outlook on the future.

A few months later, Jeff's distance from the rest of the band began to take its toll, making it very difficult for him to get to practice. The band writing had stopped and there were concerts coming up with no practice. During this time Roy began hanging out with Dave Martin (formerly of Dark Oath), a master guitar shredder. The two had similar work schedules and their jobs were next to each other so they would meet up after work and talk bands. Dave's band Viking Mountain was having problems and that's when Roy asked Dave if he just wanted to jam with 13 Winters to help out and give Diana a full band to get her playing up to par. After a few practices, Dave put Viking Mountain on the back burner and joined 13 Winters full time as their lead guitarist.

Over the coarse of the summer they re-recorded, re-mixed and re-mastered that first album with Jay Frigoletto (who mixed the X-Men 2 soundtrack). They plan on re-releasing the CD and push the hell out of it with full confidence that they have corrected their past mistakes. For a couple years Roy has been planning a magazine campaign to promote the band on a national level. By the end of the summer, they landed a spot on Terrorizer Magazine's Fear Candy CD.

In August of 2007, the band decided they had to let Jeff go. The distance he had to travel was just too great and was causing him to fall behind.

Their eyes are now set on the future. They currently have written half of their second album, Dark Palace Of Waterfalls, which they hope to have released by spring 2007. It will be an album they hope will prove themselves to the world and "Was away" the sins of their past. Although they do plan on recording it in Roy's studio again, this time with a whole bunch of better recording equipment. Also they will have a professional mix the album from the start (again, Jay Frigoletto). They realize that the only obstacle in their path is the lack of distribution, which is what they hope to get from a bigger label.

13 Winters is a hard working band that has been through thick and thin and they still keep going. 2007 is going to be the year they break out of the mud they've been stuck in and and reach a national level.

Where The Souls Wander