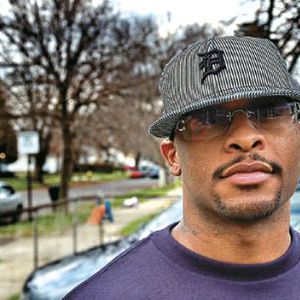 Ryan Montgomery A.K.A. Royce Da 5?9? - born July 5, 1977 - is a rapper hailing from Detroit, Michigan, United States. In addition to his work as a solo artist, Royce has released material as a member of the "super group" Slaughterhouse (with Joe Budden, Joell Ortiz and Crooked I ) and with Eminem as the duo Bad Meets Evil. The name ?Royce? came from his R shaped Turkish link chain which was said to have resembled a Rolls Royce logo. During high school Royce was one of the shortest players on his basketball team, standing 5?9? at age 18.

The name ?Royce? came from his R shaped Turkish link chain which was said to have resembled a Rolls Royce logo. During high school Royce was one of the shortest players on his basketball team, standing 5?9? at age 18.

Royce signed with Tommy Boy records in 1998 and later was slated to release his debut album Rock City. Though this relationship was premature, Royce ended up leaving the label citing creative differences.

Royce began working with well known Game Recordings who helped get him in front of the right people to negotiate a deal with Columbia Records. Royce's Rock City debut was yet again plagued with delays, during which the album was heavily bootlegged. Though not in their favor, Columbia chose to release Rock City in limited quantity and quickly went out of print by the time Royce left Columbia.

Around this time Royce dropped the underground banger ?Boom? with production by Dj Premier. Soon thereafter he joined up with Koch / Game Recordings and released Rock City (Version 2.0) independently.

Most well known for his association with Slim Shady ? the two met at a concert while Slim was promoting his Slim Shady EP. The two formed a Duo called Bad Meets Evil, releasing a number of tracks including ?Renegades? [Original Version], ?Nuttin' to Do?, ?Scary Movies?, ?She's the One?, and ?See You In Hell?, which appeared on Eminem's album The Slim Shady LP, titled ?Bad Meets Evil?.

In 2001 Royce was set to work with Dr Dre's Chronic 2000 project as a ghostwriter. He contributed tracks including ?The Message?, ?The Throne Is Mine?, ?Stay In Your Place? and the original version of ?Xxplosive? titled ?The Way I Be Pimpin'?.

Royce's association with Dr. Dre ceased when his manager, Kino Childrey spoke to a reporter about Eminem and Dre in the studio. Royce refused to dismiss his manager and long time friend, ending his relationship with Dre.

Royce and Em had a mutual friendship with Proof. Though Royce had bad blood with D12 member, Bizarre, stemming from a earlier freestyle battle with Royce's brother. Misscommunication escalated the beef between the pair, causing it to spiral out of control and include all members of the rap group D12.

Royce released several diss tracks including ?Shit on U? (over D12's ?Shit on You?), taking shots at Bizzare of D12. Royce continued record dis tracks including ?We Ridin'?, ?Death Day?, and ?Malcolm X?. There's speculation that Royce and Em often wrote bars dissing each other subliminally.

In 2003, Royce's beef with D12 finally reached its tipping point. Royce and Proof and their entourages spilled into the streets of Detroit arguing but the issue dissipated once firearms were drawn. The two rappers spent a night in jail, and settled their beef.

In 2004 Royce released his sophomore effort Death Is Certain on Koch records, as well as two mixtapes from his crew M.I.C. (Make it Count). The crew includes members Royce, Kid Vishis,and June.

Royce Da 5?9? was sentenced to jail on September 19, 2006 for parole violation for a prior DUI charge. Royce was sentenced to one year in the clink at Oakland County Jail, Pontiac, Michigan. On January 9, 2007, Royce got out of jail on work-release.

Royce has a strong ghostwriting resume including the track ?Tell Me? ft. Christina Aguilera for Diddy's album Press Play.

In May 2007, Royce Da 5?9? released a mixtape called The Bar Exam which features DJ Premier and Statik Selektah on the Wheels of Steel.

In 2008, Royce confirmed that he had officially resolved his longstanding differences with Eminem and celebrated with a reunion concert on July 12, 2008 at Saint Andrews Hall. A mixtape of the reunion concert was soon released thereafter.

Royce also had beef with other industry majors including Mistah Fab, Cashi$, and Joe Budden, Kanye West and the Ruff Ryders.