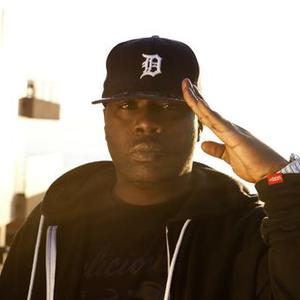 Raised by Hip Hop in the music and culture-rich city of Detroit, Frank ?Nitty? Bush is what happens when passion turns project. Frank Bush met Derrick ?Dank? Harvey in 1984 when Frank moved into a neighborhood on the east side of Detroit. Sharing the ability to break-dance and an undying love for the then relatively new music style known as Hip-Hop, the two immediately became friends. As middle school age children, they united and would compete in Hip-Hop breakin' battles against other neighborhood crews on Saturday nights.

?We were hip-hop kids,? Frank says. ?Hip Hop has always been apart of my thing. It was that, Prince and Michael Jackson.? Considered the weird kids in high school, the duo and their friends including the likes of James ?J-Dilla? Yancey (February 7, 1974 ? February 10, 2006), were apart of many formations of Hip-Hop, DJ and Breaker groups until finally being labeled Frank N Dank by J Dilla. Over the next few years their Hip-Hop hobby grew into a craft. Frank, always anxious to develop a new skill, moved from just break dancing into DJ-ing and rhyming.

It was in 1999 that Frank N Dank would release their first album on FatBeats Records, which was two 12? vinyl's with one song on each side; ?Me And My Man? / ?Love (A Thing Of The Past)? and ?Everybody Get Up!? / ?Give It Up pt II,? both produced by J Dilla. In 2000, Frank N Dank signed a recording deal with MCA Records but released no records. In the midst of the major label's collapse, Frank N Dank's prospective MCA release, ?48 Hours,? was continuously pushed back and eventually appeared as a bootleg LP in 2003. Frank N Dank were granted release from MCA records in 2003.

After a host of successful singles, touring with J Dilla across the US, London, Japan, Germany, Paris and Amsterdam, and attaining tour dates alongside A Tribe Called Quest, The Roots, Slum Village, Common, Ludacris and Wyclef Jean, Frank N Dank released their first official debut extended play (EP) version of ?3.13? in 2006. The album featured 13 tracks that Frank n Dank described as, ?soul music for players,? including an intimate track entitled ?MCA? that outlined their frustration with trying to release an album on a label that was falling apart.

The years that followed were full of overseas tour dates and numerous ideas as Frank worked to improve his craft and find ways to gain control over his own creativity. Having encountered difficulty with getting quality beats from other producers, Frank tried his hand at creating beats and arranging vocals to rhyme over for himself. Shortly after, ??people started hearing my product, and liking it. Next thing I knew, production was something I could say I do.?

In 2008, Frank decided to lay the foundation upon which his musical talent and concepts will stand by launching his own label called Digipop. The cleverly named label is formed from the words ?digital? and ?popular music? and is aimed at welcoming the change in how consumers and artists buy and sell music. ?If it wasn't for the Internet, some people wouldn't know who I am. I have had things that only released overseas, that people in the US love, and it is all because of the Internet.?

Digipop is also not limited to Hip-Hop artists. Finding a variety of music palatable, Frank wants to be able to interact with a variety of genres. The first product of Digipop is an EP titled ?The Concert Hall? due out in the summer of 2008. The EP features vocals from Big Pooh of Little Brother and production from Detroit's own ?Young RJ? Rice and Craig Lane. ?The Concert Hall? EP feels like a live performance, dressed with interactive interludes and full-sounding instruments within the beats. The project is a prequel to a full-length album to be called ?Stadium Music.? ?A concert hall is smaller than a stadium, this concert hall is just a small piece of a big thing. Stadium music is an experience,? says Frank. Equipped with masterful rhymes and catchy hooks, ?The Concert Hall,? sends you through a head bobbing and atmospheric Hip Hop performance that ends in deserving applause. ?I want my Hip-Hop to be reminiscent of the way Hip-Hop used to feel, but sound like nothing anyone has ever heard Hip-Hop do.?

Frank Nitt is currently also preparing for the release of his Delicious Vinyl projects and 2009 tour with labelmate and Detroit family friend, John ?Illa J? Yancey, the younger brother of the late J Dilla. Having both relocated to Los Angeles, Nitt and Illa will be performing live together on the Delicious Donuts Tour in support of their string of Delicious singles during the latter half of 2009. He will also be on tour in Europe in July 2009 with fellow Detroiters Phat Kat, Guilty Simpson, Big Tone, Invincible, Finale and more.