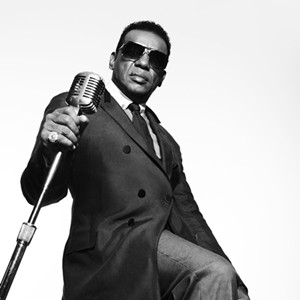 Ronald Isley (born May 21, 1941 in Cincinnati, Ohio, United States) is an American singer and is known as the lead singer and founding member of the family music group The Isley Brothers. Born the third of six brothers, Ronald, like many of his siblings, began his career in the church. He began singing at the age of three, winning a $25 war bond for singing at a spiritual contest at the Union Baptist Church. By the age of seven, Ronald was singing onstage at venues such as the Regal Theater in Chicago, alongside Dinah Washington and a few other notables.

Born the third of six brothers, Ronald, like many of his siblings, began his career in the church. He began singing at the age of three, winning a $25 war bond for singing at a spiritual contest at the Union Baptist Church. By the age of seven, Ronald was singing onstage at venues such as the Regal Theater in Chicago, alongside Dinah Washington and a few other notables.

In 1954, when Ronald was only 13, he and his brothers, Rudolph, O'Kelly and Vernon Isley, formed the original lineup of what would become the Isley Brothers. Beginning as a gospel quartet, they began singing alongside their father, O'Kelly, Sr. (also a singer in his own right at the time), and their mother Sallye (the group's first pianist).

Ronald carried on as the leader of the Isleys after Vernon's 1955 death in a bicycle accident at age 13. In 1957, the Isleys moved out of Cincinnati and headed to New York City, where they began recording doo-wop material for several record labels. After several failed attempts, the brothers hit pay dirt after cultivating a song that had been created after the brothers' inspired performance of Jackie Wilson's "Lonely Teardrops" at a 1959 Washington, D.C. show. After signing with RCA Records, the group released "Shout", a song that has since become a legendary rock and roll staple.

After the 1962 hit, "Twist and Shout", and a brief successful stint at Motown, the brothers formed the T-Neck record label (named after their New Jersey hometown) in 1968 and released the hugely successful funk anthem, "It's Your Thing", which won the group their only Grammy.

Ronald could sing rock & roll as well as funk and soul. In fact, Ronald is considered one of the original belters and vocalists of the rock era. After years singing in gritty gospel-infused vocals, Ronald introduced R&B audiences to his piercing falsetto and softer tenor in ballads that critics have hailed as some of the greatest love songs of all time, including "For the Love of You", "Harvest For the World", "Sensuality", "At Your Best", "Footsteps in the Dark", "I Need Your Body", "Choosey Lover", "Between the Sheets", and "Don't Say Goodnight." He still sang in his gritty tenor in hits like "That Lady", "Live It Up", "Fight the Power" and "Take Me to the Next Phase".

After the death of his oldest brother, O'Kelly, in 1986, Isley began working with soul singer-songwriter-producer Angela Winbush on the next Isley Brothers record, Smooth Sailin'. The album was released in 1987. Isley and Winbush shared a duet on Winbush's Sharp album (the top 40 R&B ballad "Hello, Beloved"), and in 1993, they were married. Winbush continued producing records with Isley for 1989's Spend the Night, 1991's The Tracks of Life (with a revamped version of the Isley Brothers), 1996's Mission to Please (from which Isley and Winbush scored a hit duet, "Floatin' On Your Love", whose remix featured Lil' Kim) and 2001's Eternal, before Isley and Winbush divorced in 2001. The former couple remains close.

Isley also collaborated with Rod Stewart in 1990 on Stewart's cover of the 1966 Isley Brothers hit "This Old Heart of Mine". The collaboration reached #10 on the Billboard Hot 100, one place higher than the original, and also hit #1 on the Adult Contemporary chart.

One of the founding members of the Isley Brothers, he and Ernie remain the only brothers (as of 2006) who remain in the group. His vocals have helped the Isleys become the longest-running charted group in music history. Few bands or artists could get away with having a hit in 1959, and still make hits in the new millennium. Isley has accomplished this feat with the hits "Contagious" (a Top 20 smash in 2001) and the Hot 100 singles "What Would You Do" and "Busted" (released in 2003). He was also was featured singing the hook in Swizz Beatz' "Big Business" and the remix, "Bigger Business".[citation needed]

Since the 1990s, he has become a sought-after vocalist for hip-hop artists like Warren G, Nas, UGK, Ja Rule and Jay-Z. In 1995, he began collaborating with one of his fans, R&B singer-songwriter R. Kelly, who had a hit duet with Ronald and brother Ernie with "Down Low (Nobody Has to Know)", the first hit by the Isleys in a long time. In the video to the song, Kelly and Isley introduced youngsters to the "Mr. Biggs" character, which has since become a Ronald Isley trademark. The Mr. Biggs character has also been featured in the video of B2K's "Girlfriend".

In 1992, Ronald was inducted to the Rock & Roll Hall of Fame as the charter member of The Isley Brothers. Most recently, he recorded a solo album with producer Burt Bacharach on the album Here I Am in 2003. The next year, he and Patti LaBelle scored a modest R&B hit with the single, "Gotta Go Solo". Ron Isley also appears on a track with Tupac Shakur called "Po Nigga Blues", as well as "Better Dayz". Both songs appear on posthumous albums.

Isley and his wife are the parents of, Ronald, Jr., his first son. He has a daughter, Tawana, from an earlier marriage.