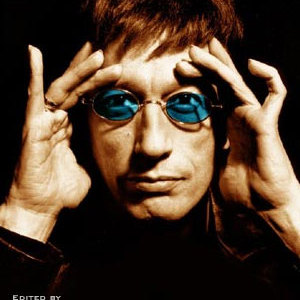 Born in the Isle of Man to English parents, the family later moved to Manchester before settling in Brisbane, Australia. Gibb began his career as part of the family trio and when the group found their first success they returned to the United Kingdom where they achieved worldwide fame. In 2004, the Bee Gees received their CBEs from the Prince of Wales at Buckingham Palace for their "contribution to music". With record sales estimated in excess of 200 million units, the Bee Gees became one of the most successful pop groups of all time.

After a career spanning six decades, Gibb last performed on stage in February 2012 supporting injured British servicemen and women at a charity concert at the London Palladium. On 20 May 2012, Gibb died after a lengthy battle with colorectal cancer.

Solo career
Traditionally, Robin's role in the group has been one of singer, for which he vied constantly with his elder brother Barry Gibb during the group's first period of British success in the late 1960s. This eventually resulted in Robin leaving the group to begin a solo career. Meanwhile, there were rumours of drug problems, and his parents threatened to have him made a ward of court (the UK age of consent at that time being 21, and Robin only 19).
Although initially successful, with a number 2 hit, Saved by the Bell, his album, "Robin's Reign", was less successful and he found that being a solo artist was less than satisfying. He returned to the group and mended the breach with his family. During the 1980s, he released three further solo albums ("How Old Are You", "Secret Agent", and "Walls Have Eyes") which were more successful in Continental Europe than in the UK or USA. However, his 1984 single "Boys Do Fall in Love" did reach the Billboard top 40
Robin's next solo album, Magnet, was released in Germany on January 27, 2003 (Label: SPV), and worldwide shortly afterwards. It features the old Bee Gees classic Wish You Were Here in a new acoustic version.

In August 2003, Robin announced that he would be releasing a new single of My Lover's Prayer, a song first recorded by the Bee Gees in 1997, with vocals by Robin, Wanya Morris, and Lance Bass. This was played on radio, but was never actually released. In October 2003 another version was recorded as a duet with Alistair Griffin, runner-up in the UK television program Fame Academy, on which Robin had appeared as a judge.

My Lover's Prayer, credited as "Alistair Griffin feat. Robin Gibb", was eventually released in the UK in January 2004 as a double A side single, together with Griffin's solo recording of Bring It On. It reached number 5 in the UK charts. The duet was also on Griffin's debut album Bring It On which charted at number 12.

In late 2004, Robin embarked on a solo tour of Germany, Russia and Asia, with Alistair Griffin as the opening act. On his return he released a CD and DVD of live recordings from the German leg of the tour, backed by the Frankfurt Neue Philharmonic Orchestra. A further solo tour of Latin America followed in 2005.

In June 2005 he joined X Factor runners up G4 at a sell-out concert at the Royal Albert Hall, London, singing the Bee Gees song First of May . A recording of this performance was released in December 2005 as part of a double A side single, credited as "G4 feat. Robin Gibb" together with G4's own cover of Johnny Mathis' When a Child is Born. This track was also included on the platinum selling album G4 & Friends which reached number 6 in the UK album charts.

In March 2006 he announced plans for more solo concerts in Shanghai and Portugal. On May 20th. 2006, Robin took part in the Prince's Trust 30th Birthday Concert at the Tower of London along with his brother Barry. They sang 3 songs; Jive Talkin', To Love Somebody and You Should be Dancing.

How Old Are You