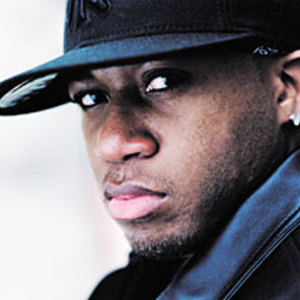 Red Caf? is a Flatbush, Brooklyn rapper of Afro-Guyanese descent.[3] He has been called "Red" all his life, a nickname inherited from his father.[4] He often refers to himself simply as "R" on songs he appears on by saying "It's R." Red Cafe began his career in a group called Da Franchise (or as often referred to Franchise) with Bed-Stuy artist Gravy and Flatbush rapper Q Da Kid appeared on many Whoo Kid and Kay Slay mixtapes under Franchise.

3] Due to disagreements between the three, they split up and went separate ways. In early 2006, Red Cafe was to release his first major-label debut I Got a Story to Tell, on Capitol Records in conjunction with Mack 10's Hoo Bangin' imprint, set to include singles "Bling Blao" featuring Fabolous and "Diddy Bop". Also believed to be on that album were his songs that received radio play "Jeep Shit", which features Fabolous & Paul Wall and the remix of "Diddy Bop" which features Fabolous, Kardinal Offishall, Coco Chanel and Curren$y. However this never eventuated. Red Cafe has also contributed to the Coach Carter soundtrack.[3][5] He has also ghostwritten for many popular rappers over the years.[3][6][7] As an underground rapper, his work is not internationally recognized, though he has been rapping on the circuit since the late 1990s.Red Cafe also made a cameo appearance in the biopic "NOTORIOUS" playing primo in which he battled biggie at the age of 17.This battle was based on a real battle biggie and a fellow Brooklyn rapper had and includes the same bar for bar lines biggie used in the movie.

Red Caf? signed with several major labels over the years, including Arista in 2003,[1] Capitol Records, and RCA, but circumstances dictated that albums were not released.[6][8][9] Red commented "I just kept running into jams where the people who believed in me they lost their positions, or just the tables turned while I was at the company and you know things change and I wasn't able to get the support that I needed".[9]

He was also recently cast in the Biggie Smalls biographic movie, Notorious as Primo, the freestyle battle rapper.[1]

In late April 2009, Red Cafe's 2009 single "Hottest In Da Hood" was officially remixed by Diddy, Jadakiss, Rick Ross, Fabolous and OJ Da Juiceman. He later said an interview that there will be 2 more remixes of that song. The 2nd remix features Juelz Santana, Lore'l, Lloyd Banks and Busta Rhymes. The 3rd features Papoose, Kardinal Offishall, Juggernot, Uncle Murda, Ross Fortune & Diddy. The 2nd remix preimered on May 5 2009 at Power 105.1. Red Cafe has yet to release a solo album in his career.

Brooklyn's Finest, What Else!!

Hottest In The Hood