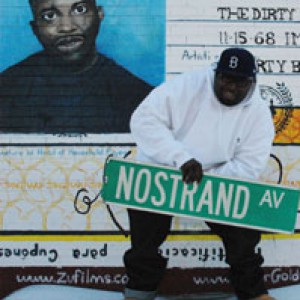 Rhyming is an art form. Just like painting, dancing and hustling. If you don't know the techniques of the genre you can easily be swept off your feet. Enter Hip Hop staple, Poison Pen, a battle MC turned street prophet. The Brooklynite started in 1996 at the first online radio station 88HipHop.com, before tearing through the streets as the undefeated champ of the NYC MC battle circuit. After participating in the Blaze Battle...

It was hunger, not chance, that brought Poison Pen to the forefront. Founder of indie rap clique Stronghold, members including Breez Evaflowin' C Rayz Walz, Immortal Technique and DJ Static before the group released the acclaimed mixtape Stronghold Volume 1. The result was a classic collaboration. "As far as the recording, I don't do Pro Tools rap. I don't do that record & send it out to a nigga I don't know have him email me a verse back... Naw, I don't make music like that."

Good music has always been his focus. His first appearance on wax "On the Mic" floated off the shelves in '98 just two years before receiving his own distribution through Landspeed Records for his debut single "Top of the Food Chain". But the microphone monster didn't stop there. He lifted Rainmakerz Records with his second solo joint "Fall Back" before slaying the video game industry lyrically. Lending his voice to high selling vids The Warriors and Grand Theft Auto: Liberty City Stories Pen's rhyme schemer duality would keep fans thirsting for his own album. "I been on everybody's else's shit ? but never my own", says Pen, with more fervor and honesty than agitation. "I did MF Doom's "Bloody Chain", the Beatminerz album, Apathy's "Eastern Philosphy" album and both of Immortal Technique's Revolutionary Volume 1 and 2." He smiles that wicked wattage unusual for a grimy street survivor. "We helped the whole NYC come up.... Now NYC needs to let me do the same".

He makes it look easy. Making records, appearing in Dave Chapelle's Block Party, VH1 Hip Hop Honors and MTV's The Shop, & DFX, spitting countless bars on albums not your own. Pen has a way of keeping his name on the tongues of Hip Hop heads without breaking a sweat. Poison Pen continues to tour Hungary, Amsterdam and Norway with the gutter mentality and linguistics that fans have grown to love, and has completed his unofficial first solo album, titled "Pick Your Poison: The Mark Of The East" available in the spring on Fontana/Universal records. "The Money Shot" album will be available soon after . This rhyming life is definitely an art form.