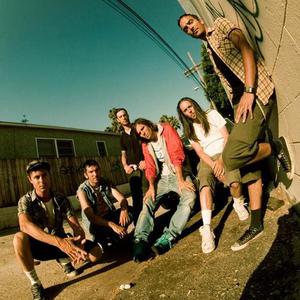 Erik de Villoutreys and DJ Frank Bailleul joined the band. Little by little the group was growing and then caught the attention of the producer St?phane Kraemer In the 15th of Juin 1999 they released they're first album called: Ke?kispasse? signed to the label Wet Music. Episode 2 : Medecine Cake (2002-) In 2002, they released Episode 2 : Medecine Cake, with this, they were already well-known in Belgium, Luxembourg, Switzerland, UK and also Japan (where they played a lot of concerts in 2002 and 2004). They also released a english version of this album, called Doctor Tank's Medicine Cake, with english lyrics. In November 2002 the group released a six-track "(Ep)Live", recorded at Les Eurock?ennes festival in Belfort. Their third album title, "Rock," announced a major change of musical direction, with greater emphasis on melody and vocals. The members of the group stated that this third album was influenced by the work of bands like Pink Floyd and The Smashing Pumpkins. Sales of "Rock" topped the 50,000 mark in France and 18,000 in Japan.Pleymo were nominated in the "Best Pop/Rock Album of the Year" category at the "Victoires de la musique" Awards. Some of the band's older fans felt alienated at the perceived change in direction and sound. In September 2004 recorded a duet with teen pop'n'rock idols Kyo, resulting in the single "On ne changera rien". In 9 October of 2006, they return with Alphabet Prison, an album that englobes all that they've done until that date, that have slower and calm songs (Un parfum nomm? 16 ans) and heavier songs (Z?phyr, Blockout). In 2007, they announced that they're going on hiatus. Mark confirmed that in a concert. Mark is going to Los Angeles, where he's going to film a movie. Franck will go to the EUA to promote his brand Kill. Beno?t is going to play in a new group called Empyr, that have members from Watcha, Vegastar and the ancient singer of Kyo. Fred also is going to play in a new group called Hewitt. Davy will continue in the group Enchancer and Lula Fortune And Eric hasn't announced any project. In 2008, the song "New Wave" from Medecine Cake was released as a downloadable track for the game Rock Band.