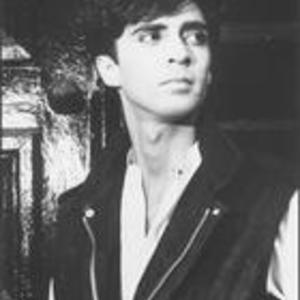 Join Peter Godwin at facebook: "http://www.facebook.com/?sk=messages#!/pages/Peter-Godwin/152584509493?ref=ts" and his band's new home here in last.fm, NUEVOMUSIC: "http://www.last.fm/music/nuevomusic" In the words of Peter Godwin: From the beginning the dream was always the same. To make passionate music from the heart- and from the art of something out of the mainstream- which might, in time, seduce that mainstream.

and his band's new home here in last.fm, NUEVOMUSIC:

In the words of Peter Godwin:

From the beginning the dream was always the same. To make passionate music from the heart- and from the art of something out of the mainstream- which might, in time, seduce that mainstream.

It began with my first single with my band Metro, "Criminal World". David Bowie empowered the dream when he covered that song on "Let's Dance", took it to a bigger world and shone a light on the three Metro albums- "Metro", "New Love" and "Future Imperfect" (recently reissued on Oglio Records as "America In My Head").

There was also a version of "Criminal World" by legendary choreographer Arlene Phillips' dance group Hot Gossip, sung by "Cats" dancer Kim Leeson and produced by Richard Burgess of Landscape ("Einstein A Go-Go").

And this year a new version of the same song by Mickey C and Last Waltz- with some awesome mix variations. So I guess it's still a "Criminal World"..

After Metro I went solo and with the global release that Metro had enjoyed (with some hits and some touring) I expanded my world with songs like "Images Of Heaven", "Emotional Disguise", "Baby's In The Mountains" and "Torch Songs For The Heroine". There were two albums ("Images Of Heaven"/ "Dance Emotions", "Correspondence") plus a Peter Godwin compilation that also featured new material ("Images Of Heaven- The Best Of Peter Godwin)- and some more hits across over 50 countries.

Meanwhile, I enjoyed a parallel career as a songwriter- and I produced some other artists along the way too, including many I wrote for.
I wrote for and with a variety of international artists including Steve Winwood, David Bowie (see above), Reggie Magloire (Technotronic, Indeep), Duncan Browne, Georg Kajanus (Sailor, Data), Camouflage, Michel Van Dyke (Ruben Cossani), Petia Pavlova, Ronny, Nathalie Gabay and The Drifters.
"Love Is A Shield", which I co-wrote with Camouflage, reached #9 in the German singles chart in 1989 and stayed there for over six months. It was also a hit in Argentina. It had further success when it was featured in the 1994 American movie "Twogether", which starred Nick Cassavetes.
I co-wrote two albums with Michel Van Dyke (now in the successful German band Ruben Cossani): "Reincarnated" and "Kozmetika". The single "She Comes At The End Of The Day" was a big hit for Michel in Germany in 1993.
In 2008 I co-wrote all the songs on the latest Steve Winwood album "Nine Lives", which reached #12 in the Billboard US Album Chart and charted in the UK and Europe too. The single from "Nine Lives", "Dirty City", featured Eric Clapton on guitar.
I was introduced to Steve by Johnson Somerset, my partner in Nuevo, my latest adventure- which you can hear and download here.
Johnson Somerset has written for and with Karl Wallinger (World Party), Shara Nelson (Massive Attack), Holly Valance, Ramshackle, Grey Cloud Zombie, Shadow Creepers and ... Nuevo.

He has co-produced albums by Bryan Ferry, Steve Winwood, William Topley and Shara Nelson (of Massive Attack) amongst others. He has created numerous remixes for many major artists including Duran Duran, George Michael and Mutya, Bryan Ferry, The Sugababes and Simple Minds. Johnson has also written and produced his own band projects, Grey Cloud Zombie, Shadow Creepers and Ramshackle.

And so the dream continues and remains the same.. To make music with passion, originality and soul.. To take it to the world.

Embrace Nuevo and maybe together we can seduce that mainstream!