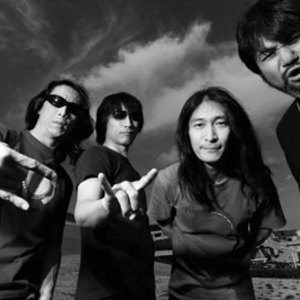 (1) In 1982, Yosuke Abe (guitar), Yoshihiro Yasui (bass), Shinya Tange (drums) and Kazutoyo Ito (vocals) got together in Nagoya to form the band OUTRAGE. Playing in the club circuit of Nagoya they mainly did covers of NWOBH. In 1986, with the departure of Ito, Naoki Hashimoto joined thus solidifying the first line up. In 1987, their self titled debut mini-album was released from their self owned label. They got some recognition outside Japan by participating with their song 'Under Control of Law' on the "Speed Metal Hell: Volume III" compilation, released in 1987 by New Renaissance Records. Outrage's highly skilled thrash metal playing has reached globally competitive and attracted tremendous interest.

In 1988 they made a major debut from Polydor Records (currently Universal Music) with their first full length album ?Black Clouds?. In 1989, their sophomore release ?Blind To Reality? was soon followed by their 3rd release ?The Great Blue? in 1990. By this time Outrage's out of the ordinary talents differentiated them from other bands in Japan. They then did their first foreign recording session with producer Stephan Kaufmann at the helm. This 4th album ?The Final Day? was released in 1991 and became Outrage's signature work, greatly recognized abroad as well as in their country. Their final tour date in support of this album at Club Citta in Kawasaki gathered media, management and record company personnel from around the world. In 1992 they opened for Pantera's 1st Japan tour and have toured with the likes of C.O.C. and G.B.H. In 1993, they transferred to MMG (currently Warner Music Japan) and their 5th album ?Spit? was released soon after. In 1995, their 6th album ?Life Until Deaf? that had included thrash, core, heavy rock elements gained them much respect as a crossover band.

Their 7th album ?Who We Are? followed in 1997 and in 1998, frontman Naoki parted ways with the band after their tour. The band then established their label 30min Records and in the year 2000, Yosuke, Yoshihiro and Shinya decided to continue as a three-piece rather than look for another singer. After releasing their first mini-album as a three-piece, ?Volume One? and ?Play Loud EP? in 2002, they released their 8th full length album ?24-7?. The following year, to commemorate 20 years of being a band, ?Nagoya Noise Pollution? was released and in 2004, they signed with Victor Entertainment resulting in yet another album, ?Cause For Pause?.

Not only did they start anew with this label, the once-departed singer Naoki returned to the band in 2007 to celebrate its 20th year and with this lineup they have sold out the Club Citta show and participated in the LOUDPARK 07 festival being showered with accolades there as well. Recently, in 2008, it has been officially confirmed by the band that Naoki will permanently be in the band again and a limited DVD+CD package to cover their 2007 tours, ?The Years Of Rage? has been released. In March, Outrage embarked their ?Awakening 2008? shows which looks back on Outrage's highly acclaimed history by revisiting their classic ?The Final Day? and ?Life Until Deaf? albums. Music from these shows will be available on their limited edition live CD ?Awakening 2008? to be released in June. They are currently back in the studio with Naoki Hashimoto after 11 years of being apart and working on a much anticipated original album again.Currently they have just released the long-awaited new record titled ?Outrage? on Nov 2009 through one of the Japanese major record companies, JVC.
http://www.outrage-jp.com/

(2) Outrage is one of the aliases used by London-based DJ and progressive house pioneer Fabio Borzacco (Fabi Paras, Sound Clash Republic, Cool Lemon) whose career started in 1988 and peaked in the early 1990s. Releases under this alias: "Tall 'n' Handsome", "That Piano Track"

(3) OUTRAGE was established in Varna, Bulgaria in 1996 and since then they have become one of the most promising and consistent bands on the scene. Their initial release was a split CS with their brothers from the other band that came out of the break-up of SILENCEBREAK - INDIGNITY. Although subsequent releases have been scarce the band has had numerous appearances in shows and festivals throughout the country becoming one of the most recognized fixtures on the Bulgarian hardcore punk scene. Outrage appeared on the compilation ?Varna Hardcore Point Of View? released in 2001 as well as the ?Freemind? compilation released in 2003. Their music can be characterized by mid-tempo sharp penetrating guitar chords so typical for the Varna hardcore scene they helped establish, brain-thumping drumbeat and lyrics that reek of the street. Recently in 2004 the band released a split CD with their good friends VENDETTA (SofiaCT). One of the highlights of their existence is playing with superheroes MADBALL in 2003 and BACKFIRE. The band has gathered a lot of material over the years and a plan for a full-length album is in the works to be released unleashing the raw power and great potential that this band has.
http://www.myspace.com/outragedivision

Outrage (formerly known as DJ Rage) has been closely following drum and bass for over a decade. His first break came at the age of 15 when he gained a slot on Bedfords (UK) pirate radio station Shock FM. It was not long after the broadcast that his vigorous sets began gracing the Bedford area dance floors, catching the attention of fans and future collaborators alike. Outrage would form his first major alliance at the age of 16 when he crossed paths and teamed up with Stomp & Weaver which resulted in his initial production efforts, with the collaborations Check the Flava and Deep in 2 Depth. The affiliation with Stomp & Weaver also helped his career with additional performances, thanks to the inception of two featured club nights hosted by them: Sugar Cubes in Lincoln and Fantasy Island in Skegness. By the age of 18 Outrage's career as a DJ began to flourish. His radio audience extended when he gained a spot on Perception FM, the largest pirate radio station in the Bedfordshire area. His audience continued to grow over the course of the following year when he began hosting a show on London's prestigious Rinse FM and started playing at various events in central Europe, alongside other UK artists. It was also at this time that Stomp had relocated to London and the two began working in the studio; resulting in the duos first major release - Snakes - on L Doubles Flex Records. Soon after Outrage made contact with promoters in New York and Philadelphia booking him for such renowned American drum and bass parties as Direct Drive, Mathematics, and Drink Land.

The year 2000 brought Outrage his most influential alliance yet, when he united with Tronic (now known as Amit) . The two went straight to the studio and over the following two years released tunes featured on such labels as Nu Urban and Chemical Warfare. These successful releases resulted in the pair meeting Digital, the vanguard of dub-influenced drum n bass; further enhancing their production knowledge and skill with his guidance. It was not long after that Outrage was releasing his own solo efforts on such drum and bass labels as L Plates, Fuze, Basement Records, Proper Talent, Intasound, Inneractive Music and the almighty Metalheadz. He has showcased his talent at such festivals as the famous Berlin Loveparade, Hungary's Sziget Festival and New Zealand's PHAT Festival. Debuting his live PA skills at Amsterdam's Ichione Subversive Renaissance, Outrage has also crossed over into the category of a live performer. The notorious emotional atmosphere that is created by his fluxes of diligent breakbeats and fervent bass lines can be heard in his Ableton Live PA.

In 2007 Outrage also proudly introduced Backlash Records, focusing on bringing forth experimental beats to breathe a newfound life into the electronic music scene. Backlash Records embraces the musical taboo and encourages like-minded artists to free themselves from the constraints the music industry has placed on the producer.

Since day one Outrage has been a purveyor of abstract music, providing a unique perspective upon dancefloor music. Honing his skills on labels such as Metalheadz, Inneractive, Intasound, Commercial Suicide, and L Plates, he now chooses to continue pushing sounds which explore the depths of the human imagination by encouraging other producers to pursue their own artist endeavors.

With a sturdy past and forthcoming catalogue from some of the greatest free-thinkers in electronic music, this label will be one that caters to a panoramic audience, not as customers, but as listeners. Look for the label to cross cultural boundaries as well as the ever-present generation gap by employing the music as art, and not a consumer product. The first release came from the owner himself, released in September 2007. The beats and atmospheres paint a bittersweet scene and showcase Outrage's continuing emergence as an artist (and now label owner) ahead of the status quo.

Whisper Audio was founded in 2006 after drum and bass producers Outrage and Aperture were graced with the vocal presence of siren enchantress Kirsty Hawkshaw. The collaboration was the genesis of a unique hybrid of cutting edge beats and bass, developed orchestration, and ethereal vocal arrangement?a new sound was born. Building upon shared knowledge and individual perspective of the music industry, the three decided to join forces. Their sole pursuit is the development and recognition of experimental music with emphasis on vocal integration. Whisper Audio is their medium? www.myspace.com/whisperaudio

2008 Outrage and longtime friend Modular (Stomp) alongside big support from Didital and Randall launched J-tek Records which brings back the long lost Jungle Techno sound. Fusing classic 4/4 rhythms and syncopated funk breakbeats, J-Tek takes us to a classic age of electronic music (1992-1994) that was short-lived, but full of energy. J-Tek serves as a bridge between the ideas of the past and the engineering of the future, and the 140-150 bpm tempo provides crossover ability with other dance genres. Once again, DJs will have the ability to build sets with elements of both house and jungle, uniting the market. Mind you, this sound differs greatly from the days of old, and the J-Tek crew is aimed at employing their own identity when creating the music, deriving inspiration from Jungle, Techno, Electro, House, Acid, Hip-Hop, Dub, and Reggae ? amongst other genres. They believe there is a need for a genre which will be accessible to all reaches of electronic music, and bring back what many labels pioneered in the early 90's only to move on to faster tempos. Already, there are some top producers and DJs on board for the project, We plan on using this support to complement a detailed marketing strategy based on an experienced collective of label owners, including events based throughout the UK.

(5) Austrian Death Metal formed in Winter 2000/2001. Their first Mini-Album ?Switch off the Pain? was recorded in spring 2006 together with Peter Fritz from Sole Method.
Their drummer decided to leave the band in December 2006, and they are currently looking for a substitute. Still, 3 Concert Dates are listed on their Official Homepage and on MySpace.

(7) Outrage (AUS) - With 5 young kids playing tunes in-and-out each show, growing slowly with experience. Watch out for them
www.myspace.com/outrageaus

(9) Outrage is a straight edge hardcore band from New Bedford. Formed in 2006, Outrage quickly established themselves in the Boston Hardcore scene. After releasing their first full length album, Savior, on Panic Records, they moved onto put out their second album Broken. Shortly after Broken, and after some changes of band members, Outrage began working on their newest EP: Love Under The Sun.