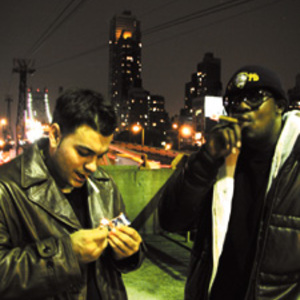 There is more than one artist with this name: a German jazz act (1) and a New York based Underground Hip-Hop group with Cage and Camu Tao (2) (description to be written) , and "The Nighthawks" are a blues and roots music band based in Washington, DC. The Nighthawks (see also: http://www.last.fm/music/The+Nighthawks ) are Mark Wenner (harmonica), Paul Bell (lead guitar), Johnny Castle (bass guitar), and Pete Ragusa (drums). (3)

The night is your friend. Lights everywhere. Light breaks the darkness. Bright red, lush green, pale yellow. Colours in motion. The only steady thing you see is the beam of your headlights. You've got a long way to go. Your thoughts grow wings, they are carried by this warm sounding bass, by this comfortably bubbling organ, by these stirring drums. And by the sound of this pleasantly muted trumpet. It sounds in front of you, behind you, everywhere. It will guide you. You will follow it. Through the night. The night is your friend.

?4? is the title of the Nighthawks' fourth album, and this title could hardly be more simple and clear. Again Dal Martino and Reiner Winterschladen have found their very own position in the universe between jazz, pop, and ambitious lounge sounds, without just fulfilling the expectations of all those who would have liked more of what the Nighthawks stand for since 1998. That was when the producer and bass player met the trumpet player. And already then Martino and Winterschladen agreed that there had to be a new way. One that lies between all the stylewise beaten paths, that would lead them this way and that, always searching for those special moods of the night. With their debut ?Citizen Wayne? they have set standards and proved that there is such a way.

The album ?Metro Bar? that followed, the sound track of a night, was a surprise success in 2001. At first go it went to the top of the German Jazz Charts, it multiplied the number of albums sold and the band pocketed the German Jazz Award. Since the Nighthawks' third album ?As The Sun Sets? was published in 2004 and easily exceeded the high aims that its predecessors hat set, it is obvious that they have to be counted on in the future. As if to confirm this, the band proved that their concept gives off the same magic live as it did in the studio.

The night is your friend. It's late. Nobody wants to play the hero now. Everyone just wants to be now. Alone with themselves and the very last drink. The big questions are sitting right next to you. Where from? Where to? Why? You chase them away. You feel your lost soul detach, you feel it float above the dark city, it just floats and watches. And there's a voice full of longing, the soft piano, the damped trumpet. Low key, like everything is supposed to be now. Only if you let it, it will enter you, seep through you. You can feel its breathing. Its breath is your breath. The night is your friend.

The night is your friend. No unnecessary words. Only this light. A thousand shades of black. Time to leave. One last glance, one last feeling. You're on your own on the way to the gate. There are sounds resonate inside you, they carry you. They tell you stories about endless dusty roads, about a grand view of the small world. A guitar sounds like the desert, a piano sounds like rain. Indefinable noises form a sound, a bass stampede. The music is with you. A trumpet melody is tattered in the wind. You let go. You drop. Feels good. The night is your friend.

?4? is a dream Dal Martino and Reiner Winterschladen have made come true. Without repeating themselves, they wish to exceed themselves. It took a lot of nights to put every last note where it needed to be. Both men used their experience from their long musical carreers. During a quarter of a century Dal Martino has made experiences as a bass player in bands like Trance Groove and a film soundtrack producer. Reiner Winterschladen has been a regular member of the NDR big band since 1995 and always has been eager for trip into new territories. An engagement with Trance Groove had him meet Dal Martino.