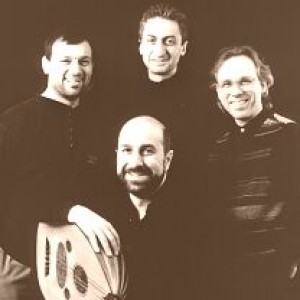 Night Ark is an instrumental quartet led by Ara Dinkjian, an American of Armenian descent. The ensemble blends the sounds of the Middle East with elements of rock, pop, jazz, and classical forms of music. The group came together in 1986 after Steve Backer, a producer for RCA, heard a demo of one of Dinkjian's original compositions and promptly issued an invitation to record. After pulling together the quartet, Dinkjian and his crew recorded the albums Moments and Picture. Night Ark next inked a deal with Polygram, which put out the albums In Wonderland and Petals on Your Path.

The ensemble has played to sold-out houses in the Middle East and Europe. It has appeared at the Israel Festival, the Yerevan International Jazz Festival, and the Istanbul Jazz Festival. The group's songs utilize such traditional instruments as the saz, the zither, the oud, and the cumbus.
Dinkjian is ranked among the premiere oud players in the world. He was raised on the sounds of jazz, pop, and the music of Armenia. At Connecticut's Hartt College of Music, he earned the first degree granted there in the oud while studying theory and composition. Night Ark also includes Arto Tuncboyaciyan on percussion. He was born in Turkey of Armenian descent, and has worked with such artists as Al DiMeola and Joe Zawinul. Armen Donelian, who is also of Armenian heritage and has worked with Mango Santamaria and Sonny Rollins, plays piano for the group. Rounding out the quartet is Marc Johnson, who previously worked with Stan Getz, Pat Metheny, and Bill Evans, among others. ~ Linda Seida, All Music Guide