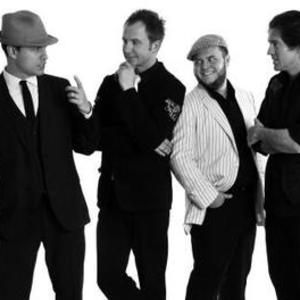 Armed with inspirational lyrics and a fresh new sound, Newworldson is rescuing soul music from being a mere genre or label and returning the art form to its sacred roots. Singer Joel Parisien says, "there's a lack of community in people's lives today. If you trace back the roots of 'roots' music, of 'soul' music, of 'folk' music, it's about folks; it's social music. We hope our fans become our friends. We hope they leave our shows feeling inspired. Our community is about uplifting people.

To a post-modern world that revolves around celebrity and consumerism, a manifesto like that seems anachronistic and distinctly un-cool. But this kind of prevailing cynicism reveals the need for classic music with a universal message. Supply and demand, ironically, and Newworldson stands poised to usher in a unique era of contemporary music history.

Blurring the lines of distinction between sassy and spiritual, they forged their name, sound, and mission statement right in front of their fan base, rather than in the confines of a boardroom. Within months of coming together as a group, they were headlining concerts and finishing pre-production for their first full-length album with companion DVD. By the winter of 2006, in just five days, the entire tracking session for their debut CD/DVD "Roots Revolution" was completed. Striving for a timeless quality, the band recorded together live off the floor, sometimes capturing the essence of a song in just one take.

With their rootsy blend of funk, reggae and old school gospel, Newworldson challenges a culture that venerates American Idol and disposable music in general. Undaunted, these unlikely defenders of soul are gracefully walking the line that fractures people into demographics, with passion and integrity.

Now signed to InPop Records, with their latest album "Salvation Station" released February 2008, NWS enters a new chapter in their lives and their careers. Four sons of the New World and their story has just begun.