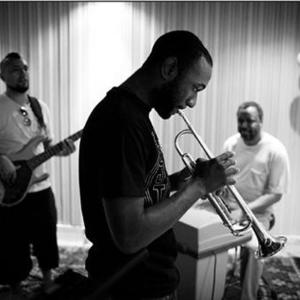 Egbert Nathaniel Dawkins III (born 1979 in Orange County, California), better known by the stage name Aloe Blacc, is an American soul singer, rapper and musician. He began his recording career as an MC back in 1995 when he joined up with hip-hop producer Exile to form the mainstay indie rap group Emanon. Aloe released his debut solo album Shine Through on Stonethrow Records in 2006 and followed this up in 2010 with Good Things.

He has also collaborated with the Cradle Orchestra under the name Bee, and they released the project Open Your Mind in 2009. His song "I Need a Dollar" is the intro song for the HBO show How to Make It in America. The I Need A Dollar Songfacts reports that after this retro soul track hit the charts throughout continental Europe, Blacc signed with major label Epic Records for the UK and Ireland release of the record.

A few years later, Aloe would ?stow away? on a Lootpack European tour and become fast friends with Oh No ? a relationship which led to many fruitful collaborations as a solo artist.

These days, Aloe Blacc has evolved into a true Renaissance man ? dubbed ?the indie R. Kelly? by online retailer Turntable Lab. Recordings like his Latin cover of John Legend's ?Ordinary People? prove that ? not only can this multi-instrumentalist produce, rap and sing ? but he can flip it in Spanish, too. With an amazingly broad set of influences ranging widely from the acoustic guitar stylings of folk artist Cat Stevens, to the soul-stirring sounds of the Negro Spirituals, Aloe prides himself on the spectrum of his musical roots. His sound often forays into the digital R&B realm, but always grooves with a tinge of Latin and the pulse of hip-hop.

Lift Your Spirit (Us Version)

I Need A Dollar (CDS)