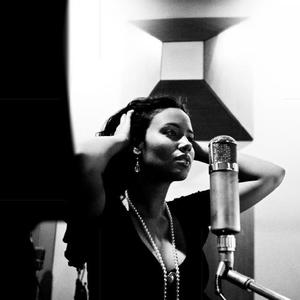 Cape-verdean born in La Havana, Cuba, in 1985, the precocious talents of Mayra Andrade first reached a world stage in 2001. That's when the singer won her country's first gold medal at the Jeux de la Francophonie in Canada. Her crystalline and agile voice has since graced stages on the four continents. In 2006, Andrade released her first CD ?Navega?, on the Sony/BMG label. In June 2001, a young Capeverdean singer, hardly 16 years old, completely unknown until then, won a gold medal at the Plays of Francophonie singing contest in Ottawa Hull in Canada among 35 competitors from around world.

In June 2001, a young Capeverdean singer, hardly 16 years old, completely unknown until then, won a gold medal at the Plays of Francophonie singing contest in Ottawa Hull in Canada among 35 competitors from around world. Mayra Curado Andrade obtained the first Gold medal for her country during an international singing competition.

This event was huge for Cape Verde , since music is one of the principal exported wealth for this small archipelago of ten islands lost in the Atlantic Ocean 500 kilometers of the coasts of Senegal . The young Mayra, who is today the figurehead of the rising generation of singers of her country, was born in Cuba from Capeverdean parents. Mayra lived in Senegal, in Angola, then in Germany.

At 13 years old, she was already noticed for her voice and her personality. She was selected to sing in Belgium during a conference dedicated to Dala? LAMA' students. After her victory at the Francophonie in Canada, Mayra did not stop performing. She toured Cape Verde, in particular at Praia and Mindelo.

Then, in the mythical room the "Coliseu Dos Recreios" in Lisbon , she sang alongside Bau, former instrumentalist of C?saria Evora. It is in July 2002 that Mayra is invited for the very first time in France, to the Festival of Jazz of "Rendezvous de l'Erdre". On stage, at the sides of two great ladies of the international jazz, the New-Yorker Sheila Jordan and Armenian Dat?vik Hovanessian, Mayra obtained an enormous success.

She enchanted the Congress of the City of Nantes during the opening of the 24th International Festival of film of the three continents while singing "a Cappella". Then, it was at the "Festival de la Harpe" that Mayra was the headline for the first time. The invitations began to follow: at the Africajarc Festival, she performed beside Joe Zawinul, Ismael Lo, and Ang?lique Kidjo. She opened for C?saria Evora at New Morning in Paris, for Enrico Macias in the "Festopale" at Etaples and for the Cuban Ernesto Titos Puentes at the time of the "Festival of Jazz" of Valves.

Mayra imposes consequently her own style. She is astonishingly at ease with Morna, Funana, Coladera, and Batuque while adding a bit of jazz. Her personality and her talent bring a true new breath to the music of the islands of Cape Verde, heir of a mixture of rhythms of Africa, the Old man-Continent.