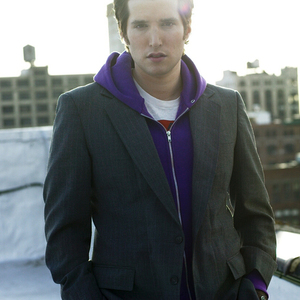 The piano phenom fuels that ride with a combination of propulsive piano playing and sly lyrics. First single, "Falling in Love (With My Best Friend)," recounts a friendship turned romance with a heavy dose of Woody Allen-style wit and an intoxicatingly infectious falsetto. During "She's On Fire," Matt's robust baritone takes over, illuminating how incendiary he can get while singing about a fiery femme fatale.

Then there's a detour to the psychiatrist's office on the endearingly bizarre "Therapy," while "Taking On Water" dives deep into meandering emotions with an epic melody. By the end of the first listen, going a little nutty with Matt White just feels so right.

The album may be the follow-up to Matt's 2007 Geffen debut Best Days, but it's truly a formal introduction to the singer-songwriter. Writing and helping to compose the production on every song himself, he decided to go back to his piano roots for It's the Good Crazy, and the results are nothing short of spectacular. "This is really my first record," he declares. "Best Days was essentially chasing a time, and I experimented with a lot of nuances, like playing the guitar on half the record. But, playing the piano has always been my one true love. My parents constantly took me to concerts including The Rolling Stones, Bruce Springsteen and Elton John, and it was those outings that gave me the itch to start playing the piano. This time, about 80 percent of It's The Good Crazy is done on piano."

Breaking away from modern trends, Matt recorded the entire album on analog tape, allowing any and all happy accidents to stay in the songs. "It was really special to record on analog tape because all of the albums I love were done that way. Tape sounds better, and it's always going to sound better. There's a depth in the sound wave that you can't capture digitally. There were no computers, no Pro Tools and no room for error. If I screwed up, it's on there," he laughs.

"I was dropped from Geffen in the winter of 2009 when I was on tour in Canada. It was a devastating experience for me. So I was depressed for a month, then realized that my happiness was in the music." Matt immediately began composing songs for what would become It's The Good Crazy. In order to capture that edgy tone, he retreated to a church in Woodstock, NY to record with producers David Baron and Henry Hirsch [Madonna, Lenny Kravitz, Mick Jagger].

While in Woodstock, Henry pushed Matt to capture music in the moment, preserving the integrity of each song from its inception. "We were in that church, and Henry really got in my head and helped me evolve," explains Matt. "He said, 'If you can deliver on a performance level, something happens when you play a song live and it's recorded onto a tangible piece of equipment. There's nothing like it'."

Working on the same board that Led Zeppelin II was recorded on and tracking to what might be one of the last 3M tape machines left in existence, Matt stirred up a sound that's evocative of Elton John at times but with a wiseass wittiness. Hence tracks like the bombastic "Therapy."
"Yes, I've gone to therapy," he exclaims. "I'm a New York City kid; people go to therapy! Everyone in their late '20s is trying to get married, and there's this mass hysteria over it in Manhattan. That song is talking to your therapist about that fear of being single. My mom wanted to set me up with my neighbor's daughter after she graduated from college in May. Those things happened, and they're in the songs!"
Meanwhile, during "And The Beat Goes On," Matt chronicles the trials and tribulations of dating in the big city?with a smirk of course. "If you're dating a girl in New York, you're going to be spending a lot of money. I'm a musician, not a banker. I'm happy with chicken fingers. I don't need fancy food."

Midway through recording, Matt teamed up with Ryko for the release of It's The Good Crazy, and he couldn't be happier with this new partnership. He comments, "Everyone at the label genuinely loves music. They've been extremely nurturing and supportive on every level. I'm free to be me and not put into a box. I was going to put out this album come hell or high-water, but I sat down with Ruby Marchand (Head of A&R) and we talked about music and the business and she and Ryko felt like the perfect partner."

Since debuting in 2007, Matt's music has been featured in numerous films, TV shows and commercials including What Happens In Vegas, Shrek The Third, McDonald's, The Hills, Brothers and Sisters and One Tree Hill. In addition, his "Songs Of Freedom" became the theme for Gap's "Vote For" campaign, airing on a special electoral episode of The Oprah Winfrey Show. Best Days also hit #4 on Billboard's New Artist chart and received acclaim from RollingStone and Details. Selling 400,000 digital downloads, he's cultivated a diehard fan base that turns out anytime he hits the stage.

The stage is exactly where he's most charming. Touring and performing alongside everyone from B.B. King and Sheryl Crow to John Mayer and Counting Crows, he's got charisma that brings audiences back for more. Donning flamboyant stage attire and pounding the keys, Matt never fails to deliver a show.

"I play piano with my feet, I play it backwards and I hit it with my elbows and fists. It's a theatrical performance,? says Matt. ?That's really what I always wanted to do as a kid.?

The world received its first taste of Crazy when Facebook premiered demos from the album as their music player's very first artist feature. Fan response to the tracks was overwhelming and it proved the perfect platform for the release of "Falling In Love (With My Best Friend)." The single goes to radio this summer, and you'll be humming along to it as soon as you hear it.

Matt grew up immersed in music. His grandmother was the first female orchestra leader in the country, while his great grandfather was responsible for giving Frank Sinatra his first violin.

Matt smiles, "My great grandfather started the Hertz School of Music. He used to give out instruments for free, and it turned out that he gave Sinatra his first violin. My whole childhood was musical. While everybody was watching sports growing up, I was studying the drum sounds of John Bonham from the 1973 live record."

His innate obsession with music is what makes the new album so insanely fun. "I'm the son of a psychiatrist," he goes on. "I connect with the Larry Davids of the world. I love the Annie Hall approach. I like things that are not perfect. I like art made from instinct. I'm definitely crazy. I'm up until six in the morning obsessing over everything, but I think I'm the good crazy."

It's The Good Crazy