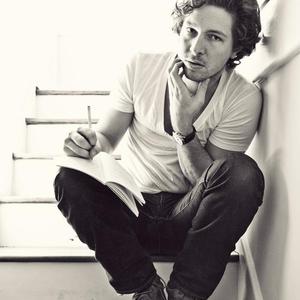 Matt Wertz is a singer/songwriter from Liberty, Missouri. Wertz gained a considerable fan base by performing at Young Life camps, after releasing "Somedays", his first album. He has released three studio albums, and one EP, which have all been produced by himself and Ed Cash with an exception on the EP where his best friend Dave Barnes helped produce the album. Aside from touring with such acts as Jamie, Gavin Degraw, Matt Nathanson and Jars of Clay, he has headlined several tours nationally in the early to mid-2000s.

Hi. My name is Matt Wertz, and this is my bio. Usually these aren't written by the artist, at least at this level- but as I was trying to decide who could tell my story the best, I felt like that person was me. So, I'd like to be the one to tell you where I come from, why I write music, what I've seen happen along the way, and where I see things going according to my finite vision.

I'm from Liberty, Missouri, but have called Nashville, Tennessee, home for the last seven years. It seems fitting that I would be writing my own biography on the cusp of my first major label release, just as I did eight years ago before releasing my first independent album. This time, though, I'm not trying to play it off like I didn't write it.

I grew up in a home where I was encouraged to explore and dive into whatever grabbed my attention. Sports? Sure. Art? You bet. Girls? Yep. Music? Obviously. There was no expectation other than to do my best ?and let God do the rest,? as my Mom always says. With that kind of freedom end encouragement, I did just that?I played sports for the fun of them, made art because I loved to create, and eventually, I wrote and performed music? because I had to.

My love for visual art led me eight hours from home to the University of Illinois, where I studied Industrial Design. As a result of that experience, music became my respite?my escape from the responsibility of class work. Dorm life served to provide a small, built?in audience who graciously embraced my first attempts at songwriting. Before I knew it, I was recording versions of those songs on my roommate's computer and burning copies for my new cohabiting fans. Eventually I started playing concerts outside the walls of Scott Hall and made the leap to register my name as a dot-com. That may not seem like a big deal today, but at the time, those were the early, shaky steps I took toward a full-fledged career in the music industry.

Early on, I was shown many graces?like a loan from my parents to pay for the first 1,000 copies of my debut record, Somedays (2001). To assuage their fear that I was throwing my life away, I democratically assured them that I'd get a job after the summer was over. Needless to say, that never happened.

What did happen was that my summer burst at the seams with bookings at camps for high schoolers? which spilled over into a fall schedule of touring their hometowns? which set up a spring full of shows at colleges? followed by more summer camps. Rinse, wash, repeat?and you have the first few years of my career.

The days between then and now have been a series of ?baby steps? that have somehow afforded me success as an independent artist. All these things really kicked into gear after the release of Twenty Three Places (2003), the first record I recorded with producer and friend, Ed Cash. The album featured some of the songs that set the tone for the rest of my career??Everything's Right,? ?Marianne,? ?Red Meets Blue,? and ?Counting to 100?? songs that are still staples in my set today.

On the heels of the Twenty Three Places release, people started taking notice. Creative Artists Agency got involved booking my shows. Nettwerk took over my management. And a bunch of record labels started knocking down my door. But none of them felt like a good fit. So what did I do? I did what I'd always done: I recorded another record on my own and kept touring.

Ed and I began working on Everything in Between in February 2005, hitting the studio sporadically whenever I had breaks from the road. ?The Way I Feel? was the first song we approached and it provided the compass for the record, ushering in an energy and musical depth that redirected my career to a new level. The tone of the record was my musical response to what I learned playing hundreds of clubs a year?I realized the need for up-tempo, lively songs to get the room going. The album also meant a lot to me personally?it was written and recorded during my first dating relationship since college, and much of the album followed the progress of the relationship. ?5:19? was written on July 7, 2005, at 5:19 p.m., while I waited for the phone call that would inevitably be the end of that relationship.

Everything in Between was the first record I released with any kind of organized push behind it. We came out of the gates strong, charting high on the iTunes pop charts and filming a video for the song ?Carolina.? Some of the songs landed in unexpected places?on TV's ?Brothers and Sisters? and in theaters via movies like My Super Ex-Girlfriend.

Since the start of my career, I've sold around 75,000 albums, played shows with Ben Folds, Jamie Cullum, and One Republic, as well as headlined sold-out clubs around the country. This was all done, mind you, as an independent artist. Over time, momentum built and more labels took notice, including Universal Republic. Finally I encountered a label that felt right, a label that could pull the trigger, a label that understood where I was coming from. And so, I signed.

The record that will be released on Universal Republic is called Under Summer Sun and it is a combination of my favorite songs from my first few independent releases, like ?5:19? and ?Everything's Right,? as well as four new songs. Among the new tracks are ?Waiting,? an introspective bedroom song that deals with the fear that I'm ?growing old but not quite growing up,? and ?Summer Sun,? my best effort at a nostalgic summer love song in the vein of Stevie Wonder musically and Don Henley emotionally. And the rest of the songs will strike a chord with anyone who enjoys soulful, carefree, singer-songwriter pop music.

How do I know? Because these songs emanate from the pages of my life, and I've seen first-hand the way that people have connected with them from their own experiences. In eight years of touring through hundreds of venues, playing three albums' worth of songs for thousands of listeners, that connection is what fuels my passion. Ultimately, the thing that you and I have here?between the words and the chords and the lights and the beats?that is the thing that encourages me to keep singing.