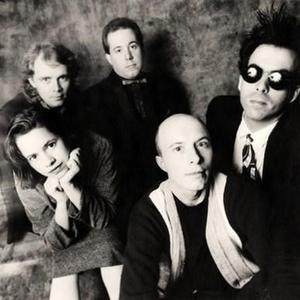 10,000 Maniacs is an alternative rock band, formed in 1981 in Jamestown, New York, that has been active with various line-ups since that time. Their best known member is Natalie Merchant, who left the band in 1993 to pursue a solo career. 10,000 Maniacs have gone through a variety of musicians throughout the history of the band. Here is a partial list of the past, present, and touring musicians:

10,000 Maniacs have gone through a variety of musicians throughout the history of the band. Here is a partial list of the past, present, and touring musicians:
Jerry Augustyniak - Jerry has been the drummer of 10,000 Maniacs since 1983. He's also played with the bands The Stains, Only humen, League of Blind Women, The Michael Lee Jackson Band, Buffalo Rising, the damn straights, etc. He has been the band's main backing vocalist since 1994.
Rob Buck - Rob was the lead guitar player from 1981 to 1999. He co-wrote many of the band's most popular songs. Rob died December 19, 2000 of liver failure at the age of 42.
Duane Calhoun - Duane played lead guitar for 10,000 Maniacs in 1981 while Rob Buck was officially in the band, but not performing with them.
Chet Cardinale - Chet was an early drummer for the band. He left to pursue a career in acupuncture.
Jim Colavito - Jim played saxophone with the band in 1981.
Dennis Drew - Dennis has been the keyboard player in the band since 1981. He's also played with The Mighty Wallop!, where he co-wrote much of the band's material, played keyboards, and had lead and harmony vocal duties.
Jeff Erickson - Jeff took over lead guitar after his friend and guitar teacher Rob Buck died, beginning by playing a short set during the band's only 2001 appearance. The first time he played with the band was December 12, 1998 on the song "These Are Days", while Buck was away from the band. Jeff was a lead singer/guitar player in the short-lived band The Mighty Wallop!.
Tim Edborg - Tim played drums with 10,000 Maniacs in 1981.
Morgan Fichter - Morgan was a touring musician with the band in 1992-1993, playing violin and singing backing vocals. She's also played with Camper Van Beethoven and Phish among others.
Jim Foti - Jim was the studio drummer for the band's 1982 EP Human Conflict Number Five.
Steve Gustafson - Steve has been the band's bass player since 1981. He has also been one of the band's backing vocalists in their live performances since 1994. He was also the bass player in The Mighty Wallop!.
Debbie Heverly - Debbie played piano with the band in 1981.
Michael Lee Jackson - Michael replaced Rob Buck as the touring lead guitar player on December 11, 1998 and stayed in that spot until the summer of 1999, when Buck returned. Michael has played in Animal Planet and The Michael Lee Jackson Band.
Amanda Kramer - Amanda was a touring musician with 10,000 Maniacs in 1992 and 1993 as a second keyboard player, also lending her harmony vocals to some of the songs. Occasionally, she'd back Rob up on guitar, picking up an acoustic on several songs. She was formerly the Keyboardist for the 80's New Wave band Information Society
John Lombardo - John, the band's rhythm guitar player and occasional odd vocalist, co-wrote most of the early Maniacs songs, but left the band in 1986, right before the band "made it big." He returned in 1994 with his duo partner Mary Ramsey, and picked up right where he left off by writing and shaping the band's music. He left the band again in 2002 after the first rehearsal before the "hits" tour.
Natalie Merchant - Natalie was the voice of 10,000 Maniacs from 1981 until she decided to embark on a solo career in 1993. In her later years with the band, she played piano as well.
Terry Newhouse - Born February 19, 1957 in Corry, Pennsylvania, Terry was a keyboard player and vocalist in the band "Still Life", which was the band's name before they began calling themselves "10,000 Maniacs." At one time, she was married to Rob Buck. Newhouse died June 8, 2005 at WCA Hospital in Jamestown, New York at the age of 48.
Mary Ramsey - Mary opened up shows with John Lombardo as John & Mary in 1990 and would play viola and sing backing vocals with the band on a few songs in 1990-1991. She a touring musician with the band in 1992-1993, playing viola and singing backing vocals. When Natalie Merchant left the band in 1993, Mary replaced her on lead vocals and added the viola as a main instrument of the band, starting with live shows in 1994 and continuing on until 2001. Oskar Saville replaced her as lead singer in 2002, but Mary agreed to become a touring musician with the band in 2006, singing backing vocals and playing viola on select songs. Mary agreed to be the lead singer for the band again for their final show of 2007 after Oskar Saville left the band.
Oskar Saville - Oskar took over lead vocals from Mary Ramsey in 2002. She occasionally plays acoustic guitar during live performances. May 8, 2003 was her first live performance with the band. During the song "Stockton Gala Days", she pulled the band's webmaster (at the time) Adam Zeitz on stage to share lead vocals. Oskar was the former lead singer of Rubygrass and also has a solo career. She left the band in late Summer, 2007 and was replaced by the woman she replaced, Mary Ramsey.

Music From The Motion Picture

Love Among The Ruins