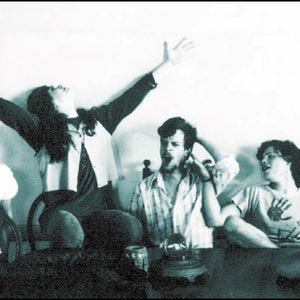 The New Bohemians started as a 3 piece ska-style band in the early 1980s, gaining experience in the new Deep Ellum neighborhood of downtown Dallas. The original line-up featured Brad Houser on bass, Eric Presswood on guitar, and Brandon Aly on drums. Drummer Aly, guitarist Kenny Withrow, and percussionist John Bush went to the same arts magnet high school in Dallas, Texas, Booker T. Washington High School for the Performing and Visual Arts. Singer Edie Brickell also went to this school. However, the others didn't know her until later.

According to Houser, Edie was there for art.[1] Houser attended Hillcrest High School and lived in the same neighborhood as the others. He played in various neighborhood bands like The Knobs which included Kenny, and was also in the Munch Puppies.
The additional core members joined in 1985. Edie became the singer after being encouraged to join the band onstage during a show. It was soon after that first show that a local agent who was booking bands at Rick's Casablanca was brought to hear the band. The band signed a six month management contract which brought with it better paying gigs at Rick's. When the six months ended, they started regular gigging in Deep Ellum.[2] Presswood left and Kenny Withrow joined as guitarist, playing his first show in July, 1985 at the Starck Club in Dallas. John Bush joined on percussion in September of that year. His first show with the band was September 12, 1985 at Poor David's Pub in Dallas, when the band was backing Bo Diddley.
The "New Bos" were always a local favorite, packing in the fans at now famous Deep Ellum venues such as Theater Gallery, 500 Cafe, and Club Dada. The Bohemians were also regular performers at the annual Fry Street Fair on the University of North Texas campus in Denton, Texas. During this period of the band's history, Edie's name was not used in the band's name. That was a strategy used by Geffen Records.
In recent years, the New Bohemians have released compilations and a live album and have recorded new material. In the mid-1990's Brickell, Bush and Withrow reunited as The Slip.[3] In 2006 the current members reunited to record and tour with the release of Stranger Things.
Carter Albrecht died tragically September 2007.
The band's song "Circle" appeared on an episode of Cold Case.

Hunter And The Dog Star

Ghost Of A Dog

Shooting Rubberbands At The Stars