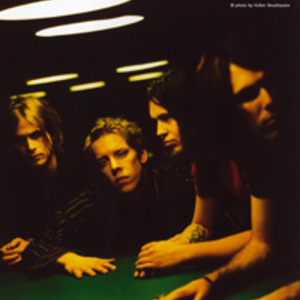 MARBLE ARCH was formed in 1994 by Niklas Brodd (guitar), Martin Boman (guitar), Johan Wadelius (vocals and then bass) and Jonas Ren?feldt (drums), back then under their original moniker, Evercry. The quartet quickly grew tired of generic metal tunes and were rather into the idea of exploring the darker side of music in its many shades of grey, since the five of them were inspired by bands that avoided well-worn paths, such as Candlemass and The Cure.

Apart from that, none of the creative forces in MARBLE ARCH ever had any fear of musical contact with either the UK rock scene, LoFi indie pop/rock or even ?80s goth bands. Thus it was only natural that they would never be your generic gothic metal band, even though influences from heavier music could not be denied.

After taking the normal steps in the beginning of a career (shows, demo, more shows?) drummer Jonas left the band. Their debut MCD Demise The Crown was released through the small Swedish label Heathendoom Records and earned them their first positive reactions. In 1996 they finally found drummer Petter Ter-Borch who added the last missing piece to define their musical vision. After two years of intense rehearsals they finally felt comfortable enough to release their mini-CD Focus which received excellent reviews in national magazines and fanzines. Even though the first labels approached the band they decided to take their time to find a suitable partner. After finally signing with Century Media Records in 2001, relocating from their original hometown Bolln?s to Gothenburg and also renaming the band MARBLE ARCH, they were more than ready to start pre-producing their debut album with Finnish producer Anssi Kippo (Children Of Bodom, Entwine, Lullacry). Around the same time Johan decided to fully concentrate on his duties as a vocalist and frontman, but the vacant bass-spot was quickly filled by then-session musician Jesper Bagge (who became a permanent member after the album was recorded). In the end of May they sequestered themselves in Lappeenranta, Finland to record Another Sunday Bright in Anssi Kippo's Astia Studio. During the recording, Tanja Lainio from Lullacry stopped by to add some female backing vocals to some of the songs which only cater the dark and melancholic vibe of this rock album. It might take a few turns here and there, but afterwards Another Sunday Bright will without a doubt be a fellow friend ? and not only for your darkest hours.

Children Of The Slump