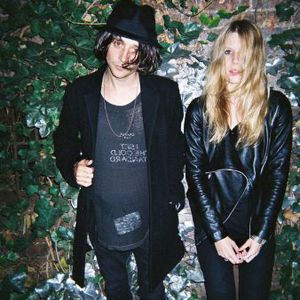 There are at least two artists recording as "Minks". 1) Minks are a Brooklyn, NY duo lead by singer/songwriter Sean Kilfoyle. Their debut 7? ?Funeral Song? was released in March 2010. They are one of the the latest additions to the Captured Tracks label. Their full length album, ?By the Hedge? was released in January 2011. Described by Captured as follows: ?Like if Robert Smith gave birth to a baby, and the baby was actually a cassette of Cure demos that had a lot more staying power than actual Cure demos.?

1) Minks are a Brooklyn, NY duo lead by singer/songwriter Sean Kilfoyle. Their debut 7? ?Funeral Song? was released in March 2010. They are one of the the latest additions to the Captured Tracks label. Their full length album, ?By the Hedge? was released in January 2011.

Described by Captured as follows: ?Like if Robert Smith gave birth to a baby, and the baby was actually a cassette of Cure demos that had a lot more staying power than actual Cure demos.?

"Shaun Kilfoyle and Amalie Bruun comprise the duo Minks, whose moody take on indie pop initially drew comparisons to the Cure, New Order, and My Bloody Valentine. Little was known about the group until the April 2010 release of their first single, Funeral Song, by Captured Tracks, also home to the like-minded Wild Nothing. That summer, the band returned with the single Ophelia, which revealed a softer side to Minks' music. Live shows (for which the band expanded to a six-piece) with Veronica Falls and labelmates Cosmetics and Blank Dogs increased buzz around the band, culminating with the release of Minks' debut album By the Hedge in January 2011. "

"Hip Hop recording artist Minks may not be your average rapper, but with his hot new single titled, ?Listen,? the lyricist-performer is hoping to rekindle the style of flash and opulence that fans found so exciting in 90s Hip-Hop.

?Listen? is a catchy mid-tempo song with some very rich rhythmic African drum patterns and is available on iTunes. It is produced by Atlanta, GA's Cool Ruck.

?Once I heard the beat, I knew this would be a statement song for me,? says Minks. ?It really defines who I am as an artist. It just felt like a shut-up and listen song. After 3 ? minutes if you don't like me, then it is what it is. I think ?Listen' has the potential to be a commercial hit, and get the respect of the hipsters and the backpackers.?

Minks recently signed a deal in the UK with Melt Down Records to release a Dub & Bass remix version of ?Listen? for the European territories. He was signed by the label's founder, Ross Allen, a celebrated DJ and a A&R executive for Island Records UK (Lady Sovereign, The Sugababes, DJ Shadow).

Minks, whose government name is Steven Burton, was born in St. Louis, Missouri. Since his parents separated at a very young age, he found himself in the position of traveling back and forth between his Dad's home in Missouri and his Mom's in Los Angeles. Minks' interest in music came early on. His Dad was a drummer and a DJ who spun records in and around St. Louis. He also kept his eye on his older brother, an aspiring young executive who worked at the Warner Bros. and LaFace record labels.

While in college, Minks became friends with DJ Ref. The two aligned as creative/business partners, and invested in a studio to form 717 Entertainment. Through their production company they produced and licensed music cues for Black Entertainment Television's Comic View show.

A turning point in Minks' career was a meeting with songwriter-producer, music supervisor Ray Cham. Through that association, Minks co-wrote the song, ?Gotta Lotta,? by Geffen recording act Prima J. The track was featured on the Gold-certified Disney soundtrack, Jump In. Subsequently, Minks placed songs in a string of television movies on the Spike TV and Hallmark networks.

?Things were moving really fast working with Ray,? Minks recalls. Cham unexpectedly died in 2007. ?His passing was very difficult for me and everyone involved with him. Ray was the first person who had faith in me and really gave me a shot. My music got better. I learned the mixing process better. I learned the fundamentals of making a song through him. I will always remember that experience.?

And with a diversity of experiences under his belt, Minks is not your average rapper. He is a songwriter, a producer, and an entrepreneur. He has traveled around the U.S. performing in the nation's biggest cities. ?I've been through so much and I've accomplished so much, but I feel like I'm restarting with a loaded gun. I'm loaded with knowledge, experience and have learned a lot of lessons. God set me up to learn a lot of things and now I'm ready to be in the spotlight.?

He is a young visionary. ?The name Minks is about a brand of opulence, luxury, affluent taste and lifestyle,? he says. ?When people hear my music, and see my videos, I want to take them back to a period like Mase's Harlem World; lavish videos, beautiful models, everything top notch. But at the same time, the music has to be lyrically respected, my production undeniable.?

?The advice I try and follow is to J.M.G.M.; Just Make Good Music and put it in God's hands?.that's all you can do! I'm going to make good music at the end of the day!?
"