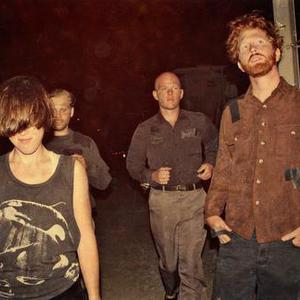 Lower Dens are an indie folk band from Baltimore, Maryland formed in 2010. Formed by Jana Hunter, the band has released two albums: their debut on Gnomonsong records and a follow up album on Ribbon Music. The record as a whole begs for an assessment of all the flaws inherent in our existence, and to imagine a better, more suitable, logical way for humanity to live.? So says Lower Dens leader Jana Hunter about the band's stunning new album Nootropics.

The record as a whole begs for an assessment of all the flaws inherent in our existence, and to imagine a better, more suitable, logical way for humanity to live.? So says Lower Dens leader Jana Hunter about the band's stunning new album Nootropics. It's an ambitious work, and it delivers ? heavily metaphorical, the symmetries and concordances of the lyrics run deep; the luminous lines of the music converge at a point in a future just out of view. Lower Dens has made music that reconciles fear and uncertainty by freeze-framing it and turning it into a thing of beauty.

Pronounced no-eh-tro-pics, the title refers to a type of drug used to enhance memory or other cognitive functions. That's a reference to Hunter's interest in transhumanism, the use of technology to extend human capabilities. It could just as easily extend to the music itself ? even the band's newfound keyboards achieve a human-digital synthesis that aptly mirrors the album's themes.

Lower Dens released their beguiling debut album Twin-Hand Movement in July 2010. Like Nootropics, the full depth and range of its formidable charms unfold over multiple listens ? it's a grower, and accordingly, Lower Dens' popularity and acclaim grew and grew too. They were asked to join bigger and bigger tours, with the likes of Bear in Heaven, the Walkmen, Beach House, and Deerhunter, and wound up playing around 200 shows in that grueling 12-month span, developing the kind of musical telepathy that only relentless touring can bring.

Somehow, amid all the travel, Hunter had to write songs for the next album. So she got a keyboard ? an instrument she doesn't really know how to play ? plugged in some headphones, and began composing, writing most of Nootropics in the back seat of the Lower Dens tour van as it rolled down the interstates. ?It helped me write a record that feels good looking out a car window,? Hunter says. But it also helped her to write a trailblazing new record.

And that's what Nootropics is all about. The album is the second of a four-album cycle that the band had planned from the very beginning of its existence. Where Twin-Hand Movement was about community, using the band's native Baltimore scene as a springboard and inspiration, Nootropics is the next step.

?This record goes beyond the community around us and takes a broader look at human history,? says Hunter. ?We're creating a world to help our species survive and make our lives easier, but if we continue down this path it will destroy us. And that might seem bitterly sad, but I prefer to see our options and our potential.?

?Alphabet,? ?Brains? and ?Propagation? form a triptych that states the album's key themes. ?Alphabet,? a reference to a 1920 dadaist poem by Louis Aragon titled ?Suicide,? ?looks at our entire history as a species,? says Hunter. ?Brains,? with its sleek, metronomic pulse, examines our relationship to technology, in particular artificial intelligence, and the lush future-pop of ?Propagation? explores the desire to procreate: ?Is it a trap?? Hunter wonders. ?A trap custom-fit to each individual??

The minimalism here is monumental: Like icebergs viewed through deep mist, elements in the music that seem subtle at first soon reveal themselves as colossal developments. Hunter's luxuriant alto croon soars on ?Nova Anthem? and lapses into a mysteriously submerged murmur on ?Brains.? Throughout, Adams' guitar scythes the songs with impeccable electric filigrees.

From its opening moments to its last, Nootropics is concerned with texture and timbre: the papery thump of brush on snare, soft subsonic thunderclaps, the glorious clamor of a wall of symphonically stacked electric guitars. And there's the sun-dappled cloudbank of sound of the instrumental ?Lion in Winter, Pt. 1.? ?We'd done noise jams in practice to keep our ears fresh, so we developed this one with a bit of a plot to it,? says Hunter. ?That recording is the best we'd ever played it. It's one of my favorite things we've ever done.?

Themes of renewal mark the album's truly epic closing track, ?In the End Is the Beginning.? ?We think we know what there is to know about our reality,? Hunter observes. ?But there's a real possibility that we don't know much at all. Perhaps we're in the process of acknowledging that and moving on to better things. And the narrator of the song is saying that he or she is ready for come what may.?

Spare and yet teeming with sound and portent, Nootropics rewards attentive listening. ?You have to be paying attention,? Hunter says, ?which is a lot to ask of people. But that's the way I like it.?

Only time can tell if a work of art is visionary, but very few are even in contention. We'll see if the darkly hopeful future forecast in Nootropics comes to pass. Stay tuned.

Swarming guitar fuzz, bass waves, Jana Hunter's voice, and insistent drum throbs are the core components of Baltimore's Lower Dens. Hunter, sometimes known for intimate, ghost-heavy weird-fi, is now writing and playing with a group that might get filed as new wave, or drone pop, or post-punk. With due deference to her solo work, we're very glad.

The swarming wave-throb, coupled with Hunter's lyrics and redolent, charred voice, wrecks.
The band's upcoming record, Twin-Hand Movement, is eleven perfect songs long. From opener ?Blue & Silver? (anxiety mounts at a quick clip until the final climactic release) to ?Plastic & Powder? (a churning, narcotic slow-burner) to ?Hospice Gates? (penultimate album cut, proud weirdo anthem, possible creative zenith), not one is a space-taker. They're rife with the survivalist paranoia you'd expect from residents of a post-urban port hole (and this particular songwriter), crafted methodically and beautifully, and carry you enthusiastically out into the rolling breaks of industrial filth-water.

Lower Dens formed in 2009, when Hunter set about finding a full-time band. They spent the rest of the year sweating in attics and basements, and only stepped out of the shadows to do a quick tour and record. Twin-Hand Movement was recorded by Chris Freeland (ex-Oxes drummer; proprietor of Beat Babies, Baltimore), mixed by Chris Coady (at his DNA, NYC), and mastered by Sarah Register (of the Lodge, NYC and the band Talk Normal.)

- Former bio, from the release of Twin-Hand Movement [August 2010]