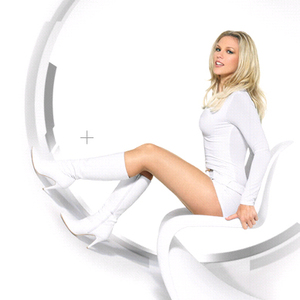 Laure Pester, known professionally as simply Lorie, born on May 2nd 1982 in Le Plessis-Bouchard, Val-d'Oise, France is a French pop singer well known within the Francophonie, who started her work in 2001 Her first single "Pr?s de moi" was released as a free download and became a big hit. The success of this song led Sony Music France to offer Lorie a record deal. Her first album "Pr?s de Toi" was released in 2001 and met enourmous success.

It is certified three times platinum for selling over a million copies. The sound of her debut album, teen and bubblegum pop, led the critics to dub Lorie as the Britney Spears of France.

Her third studio album "Attitudes" came a year later. It has a more pop-rock sound even though it's a teen pop album on its core. It was not as successful as her previous efforts as it sold 500,000 copies, but it is still considered a big success.

After another live album and a greatest hits collection Lorie released in 2005 her fourth album "Rester la m?me" . By then Lorie's popularity had declined and and the production of her albums was dated. This didn't prevent her from topping the albums charts once more but the sales were very decreased. In 2006 an unsuccessful thrid live album was released called "Live Tour 2006".

Lorie's fifth studio album, and her ninth album overall, "2lor en moi?" marked the change of her sound. While most of her previous records consisted of pop/rock and bubblegum pop songs, Lorie thought it was the moment her music should become "more mature" since her fans "were all growing up". With the help of popular producers, a fresh new album was born, different from anything Lorie had done before. The albums sounds more like Kylie Minogue or Rachel Stevens, being more electro. The critics praised this transformation but in terms of sales the album was a minor hit. it debuted at #7 in France, less than any other of her albums and is certified gold. The singles were more successful. "Je vais vite", released as the album's lead single, had great response and chart success. The second single "Play" became popular on its own all across Europe, especially in clubs. On December 5, 2008, the album's third single, "1 Gar?on", was released. The promotion was little but the song's lyrics ("parce que t'aime un gar?on", which means "because you love another boy") and the video caused much controversy (for some of its scenes like the one when two guys get very close to each other and are about to kiss).