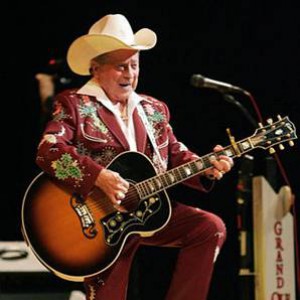 Hillbilly singers never will come any hillbilly-er than Little Jimmy Dickens. Indeed, as he put it himself on one early hit record, he's ?a plain old ... cornbread lovin' country boy,? from the toes of his loudly colored cowboy boots to the top of his head, just 4'11? later. The current generation of country fans will recognize Jimmy from his frequent guest spots in the videos of Brad Paisley, but the truth is that Jimmy first gained national exposure nearly half a century ago.

The current generation of country fans will recognize Jimmy from his frequent guest spots in the videos of Brad Paisley, but the truth is that Jimmy first gained national exposure nearly half a century ago. None other than Roy Acuff first introduced him to the old Ryman Auditorium stage all the way back in 1948, and Dickens has been wowing Opry audiences pretty much ever since?longer than any other current cast member?with his flamboyant rhinestone-studded outfits, wild novelty hits, and country humor.

Jimmy was the oldest of 13 children born to a West Virginia farmer. He started singing on radio station WJLS in nearby Beckley while attending the University of West Virginia, opening his program ?crowing like a rooster.? Even though Jimmy had to walk to and from the station, he set his sights on an entertainment career that would eventually find him spreading his brand of ?Hillbilly Fever? all around the world.

Literally. Jimmy has made 13 trips to Europe, and he twice entertained the troops in Vietnam. In 1964, Jimmy became the first country artist to completely circle the globe on a world tour. That same year, he released ?May the Bird of Paradise Fly Up Your Nose.? The single topped the country charts, even went to No. 15 on the pop charts, and Jimmy found himself on several network shows, including The Tonight Show with Johnny Carson.

Of course, by then, Jimmy had been a beloved figure among the country faithful for years. He'd had a string of down-home novelty hits, including ?A-Sleeping at the Foot of the Bed,? ?Out Behind the Barn,? and ?Take an Old Cold Tater (And Wait),? the song that prompted Hank Williams to dub his diminutive friend ?Tater.? Jimmy is also a master of the recitation and a ballad singer so expert that it once prompted no less than George Jones to honor his friend with the tribute album Like the Dickens!

Jimmy joined the Country Music Hall of Fame in 1983, and in 1996 he and his wife Mona celebrated their 25th anniversary by renewing their marriage vows on the very Opry stage where Dickens still shows the world that ?I may be little....but I'm loud!?