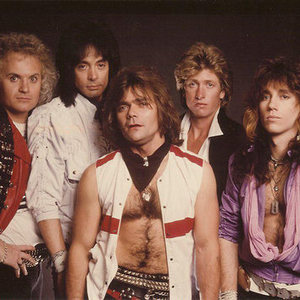 Legs Diamond are a rock and roll band that has often been called "The American Deep Purple". They formed in Los Angeles, California in the mid 1970s and released their self-titled debut album for Mercury Records in 1977. The original band broke up in 1980 after three popular albums, but reformed in 1984 after their original albums had begun to acquire a cult following. The new lineup released several more albums and continued to perform throughout the 1990s and 2000s.

In 2005, original frontman Rick Sanford was replaced by ex-Montrose and Wild Horses vocalist John Levesque, and the band released their latest album, "Diamonds Are Forever", in 2006. Original members include Roger Romeo (guitar), Michael Prince (keyboards/rhythm guitar), and Jeff Poole (percussion). The band still does the occasional gig in the Los Angeles area and at least once a year in San Antonio,Tx where they are still hugely popular, the result of being a favorite of influential disc jockey Joe "the Godfather" Anthony (1940-1992). - Trivia: Mentioned in the San Antonio Express-News ( june 6 , 2007)as the 'local weird music phenomenon' vs. Clevelands 'Michael Stanley Band' in comparing city favorites for the 2007 NBA finals. as a final note , Keyboardist Michael Prince is active in studio recording, in Los Angeles, working with some better known R+B and Pop Acts including Beyonce and Michael.