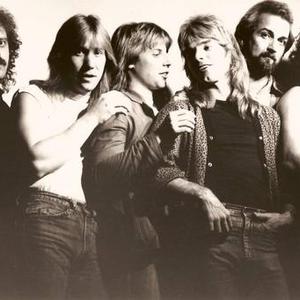 Louisiana's LeRoux (a.k.a. LeRoux) is a aor band founded in Baton Rouge, Louisiana, USA, that saw its heyday from 1978-1983. Their biggest hits were "Take a Ride On a Riverboat" with its 4-part a capella intro, the regional smash "New Orleans Ladies", "Nobody Said It Was Easy (Lookin' For the Lights)" (their highest charting single), "Addicted", and "Carrie's Gone". The group was formed in 1977 and signed a deal with Capitol Records as The Jeff Pollard Band, but shortly changed their name to Louisiana's Leroux, which refers to roux, a Cajun gravy base used to make gumbo.

The group was formed in 1977 and signed a deal with Capitol Records as The Jeff Pollard Band, but shortly changed their name to Louisiana's Leroux, which refers to roux, a Cajun gravy base used to make gumbo. All of the songs on the self-titled 1978 debut album were sung and written by Pollard except the big hit, "New Orleans Ladies", which was written by Medica. "Bridge Of Silence" was a minor hit also. Two more albums followed (Keep The Fire Burnin', and Up), but the band was subsequently dropped by Capitol.

Starting with 1980's album Up, they dropped "Louisiana's" from their name and became simply "LeRoux". In 1981 they signed with RCA, and issued their 4th LP, Last Safe Place which was their highest charting album and included their only Top 20 charting single, "Nobody Said It Was Easy", in early 1982. Other changes were in store as Campo and Pollard both quit, with the latter renouncing rock music and entering the Baptist Christian ministry, where he remains today. Fergie Frederiksen, who would later step in to fill other shoes in the band Toto when Bobby Kimball left, and along with guitarist Jim Odom, took over for Pollard on the 5th album So Fired Up, and they scored a minor hit with "Carrie's Gone", which, Odom and Frederiksen wrote after Frederiksen's break up with actress Carrie Hamilton, who was Carol Burnett's daughter. Unfortunately, it wasn't enough to keep them from being dropped by RCA, at which point the band called it quits.

Most of the band got back together in the 1990s and released Ain't Nothing But a Gris Gris in 1999.

After releasing a greatest hits compilation entitled Bayou Degradable: The Best of Louisiana's LeRoux in 1996, the band decided to get back together to perform live shows in the southern US and along the Gulf Coast and have been doing so ever since. Original players Medica, Haselden, Peters, Roddy, and Campo reunited along with former members Jim Odom and Randy Knaps (who had taken over for Frederiksen shortly after the 5th album), plus new members Boo Pourciau, Nelson Blanchard, and Mark Duthu. Campo left a year later. Terry Brock came on board in May 2007 as LeRoux's singer, replacing Knaps.

After the group's heyday, guitarist Tony Haselden became a Nashville songwriter in the late '80s and penned the country hits "It Ain't Nothing" for the late Keith Whitley, "That's My Story" for Collin Raye, "Mama Knows" for the group Shenandoah and many others. Bassist and producer Leon Medica resides in Nashville and is in high demand as a studio musician and songwriter.

Members of LeRoux backed up Tab Benoit on his Brother to the Blues and Power of the Ponchartrain CDs, recorded a live DVD and CD in Nashville with Tab in early May 2007, and are currently touring nationwide with him.

On October 10, 2009, during their performance at Tab Benoit's "Voice of the Wetlands" Festival in Houma, Louisiana, LeRoux was inducted into The Louisiana Music Hall Of Fame as their 50th Inductee.

Ain't Nothing But A Gris Gris