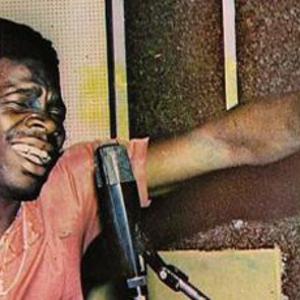 Ethan Buckler was originally the bassist for underground Louisville, KY, sensations Slint during the late '80s, but after recording the 1989 album Tweez with the group, Buckler wanted to start a dance band in the vein of early B-52's. Buckler left and formed King Kong with vocalist Amy Greenwood, bassist Willie Maclean, and drummer Ray Rizzo. The first order of business for the band was to record a self-released 7".

By 1990, King Kong had worked out a deal with Trash Flow Records, which promptly released the band's second 7", Bring It On. Within the next year, Homestead Records had made an agreement with the group to release their debut full-length LP, The Old Man on the Bridge. It was with this recording that Buckler started to make a conscious effort to begin writing conceptual story lines for each of his full-length releases.

The formula proved to be a success and The Old Man on the Bridge became a college radio hit. Following a brief tour in support of the record, King Kong recorded 1993's Funny Farm LP for Chicago's Drag City Records. The group was also featured on two compilations that year, which included the Self-Destruct label's Louisville Sluggers, Vol. 3 as well as Drag City's Hey Drag City. As 1994 rolled around, King Kong was gaining more notoriety as they received a feature in Spin magazine. They were even asked to perform on Lollapalooza's second stage from August 12-18 alongside bands like the Boo Radleys and Shudder to Think. Following the Lollapalooza stint, the band released the two-song 7" Hot Dog Days on Drag City that fall. 1995 saw the third full-length release by King Kong, titled Me Hungry. It was another concept album dealing with the primitive subject matter of a torrid love affair between a yak and a caveman.

When King Kong was preparing to record their next full-length LP, Kingdom of Kong, Buckler was growing tired of people analyzing the lyrics and concepts of each release. His decision was to write a record that wouldn't contain a story, so much as a motif, and that way the listener could dance to it rather than sit and be critical. Following the October 1997 release of the album, the band toured Europe. At the end of 1998, King Kong decided to go on hiatus. Throughout 1999, Buckler worked at Churchill Downs horse track and also had a full-time job as a dishwasher. It wasn't until December of 2000 when King Kong re-formed to play some shows in Louisville, the highest profiled of which was their February 3, 2001, headlining performance at Headliners Music Hall with former Slint guitarist David Pajo's band Papa M and VHS or Beta. Drag City released the King Kong demos and outtakes CD Breeding Ground late in 2001 on its smaller imprint, Sea Note, followed by the electro-inspired The Big Bang in 2002. Five years later, King Kong returned with Buncha Beans, which felt like a throwback to the band's early albums.